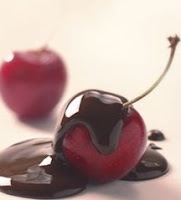 Greatgable, you're not allowed to read this post. Go away and chew on a winegum...

Now, I never thought I'd find myself saying this. In fact, I think I can feel my synapses going into some sort of shock response even as I type...

I adore chocolate. I went into rhapsodies over a little chocolatier in Bluewater in a previous post, after comparing the merits of various brands of chocolate in another.

But all the time, I still would eat bars of Cadbury's Dairy Milk (if there wasn't anything else to hand) and Galaxy. My waistline bears testimony to my devotion, unfortunately. Anyway, as I was saying, I discovered a rather nice chocolatier in Bluewater. The chocolates appeared to be rather better quality than Thornton's, and I was smitten with the chocolate-covered, kirsch-soaked cherries. On reading the small print on the label, I noticed that there was a website...

...and on that website was a page advertising a chocolate tasting club...

I didn't think too much about it, to be honest. The idea appealed to me, but I figured it was just a marketing gimmick to snare punters who had grown wary of setting foot inside the store. However, I joined the club anyway.

A few days ago, a box landed on the mat. Chocolates! I planned to munch through a few that evening when I had a little leisure. When I opened the box, there was a surprising amount of information... and a score card. I realised that this was a serious matter, not one to be munched through absent-mindedly. So I delayed the tasting session until I had sufficient time to do it properly... 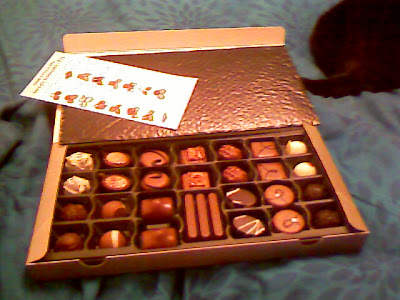 Well, I read the booklets... I studied the descriptions of the chocs... I decided to savour them slowly and carefully...

...and came to the conclusion that Dairy Milk is to chocolate what Liebfraumilch is to wine! I still have half the box left... these are not to be scoffed. I also have some "imitation" chocolate which I now view with something bordering on distaste. I'll find them a good home: after all, plenty of people drink Liebfraumilch; but I may have discovered the cure for chocoholism: become a chocolate connoisseur...
Posted by Mulier Fortis on 1.5.07

I'm intrigued! I wonder where I can get great chocolate here in the U.S...

Remniscent of Roald Dahl's comments about chocolate in his autobiographical Boy. He would get sample chocolates which he had to judge.

He called one of the chocolates "too refined for the untrained palate." Mind, he was nine or ten years old.

I read it anyway lol. Just to see what I am missing.

Hersheys make Cadbury's over here under licence and it is very close to the original, they do a good job (quite surprising).

In fact, I have a bar of Dairy Milk upstairs in the kitchen.

Walmart (of the devil ;-)) have a pretty good line in own brand chocolate that is made in, and imported from, Beligium.

Then there are the usual suspects such as Godiva.

Mac, I gained 3 pounds just reading this. Think I`ll skip supper and go on a chocolate binge instead.

Do they accept overseas members? I'd be most happy to join!

But...what will happen during Lent? Shivers...