Ok, my friend Newhousenewjob has been kind enough to tag me for this meme, no doubt as punishment for the long hours I forced her to stay in Starbucks drinking coffee (there weren't many places to get a reasonable cup of coffee when I lived in Peckham...)

Now, since she hasn't posted any rules, I'm going to have to figure them out: it seems like you have to identify 5 favourite Latin hymns, 5 favourite traditional hymns in English, 5 favourite 20th century hymns and 5 favourite hymns for particular occasions (Christmas, Easter, Funeral, Baptism, Wedding)... and then you have to find links for them...

Not sure about the links... I can feel myself losing the will to live...
(I might possibly add the links at a later date...)

Ave Maria (Bach/Gounod)
Ave Verum (Mozart)
Victimae Paschali Laudes (plainchant - the sequence for Easter Octave)
Panis Angelicus (this one I know a bit - I have sung it - but I don't know it by heart, unlike the previous three...)
In Paradisum (I don't know how it goes, exactly, never having sung it, but Fr. Tim always chants this at the end of Requiem Masses and it is seriously spine-tinglingly beautiful!) 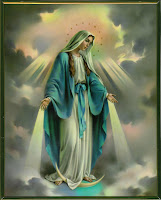 Mary Immaculate, star of the morning
Ave Maria, O Maiden, O Mother (though it has a few Latin phrases, it's really an English hymn... honest!)
Bring flowers of the rarest (the reference to "Queen of the May" in the chorus means that this hymn is rarely played... but the "May" it refers to could be considered to be the flower rather than the month... )
O purest of creatures
O Mother blest

...Not fair... there were soooooo many more I wanted to include!

Ummm. You may have me there... this is almost impossible. I am shocked to see that, according to the hymn book I have to hand, there are only just these five, and I wouldn't class them so much as "favourites" as "least objectionable" ! Ok, before you shoot me down in flames, if these are played well, and sung well... perhaps as a meditation for a Holy Hour, these can sound quite good. Newhouse, my tastes have changed - when I first returned to the church, I only heard (and therefore learned) the new stuff. Now I've been exposed to more of the traditional hymns, I'm afraid that they win hands down. However...

Be still for the presence of the Lord
From heav'n you came (The Servant King)
Now the green blade riseth (it's dated 1928 in my hymn book... that makes it 20th century!!)
Turn to me
Tell out my soul (I was surprised at this one, I thought it was older. I guess 1961 was just before the rot set in!)

Christmas: Silent Night... (literally! No, only kidding!!)
Easter: Thine be the glory
Funeral: Abide with me
Baptism: Guardian Angel from heaven so bright (yes, I know I've had this one already!)
Wedding: Heheheh... it should be the Ave Maria... but I quite like Dear Lord and Father of mankind (because of the next two lines: "forgive our foolish ways, reclothe us in our rightful mind" !) but that's being wicked!!

That's finished, Deo gratias! As I said, links may follow some time in the future... if I have nothing better to do! I tag anyone who has the energy - just leave a note in the combox (not the whole list!!) so we can pop over to see your answers...

UPDATE: It seems that I was tagged by Andrew as well...
Posted by Mulier Fortis on 30.4.07

Some nice hymns there. Just for the people you've tagged - as far as I can tell, there are no hard and fast rules for this meme, in terms of number of hymns chosen and categories included. I made up the bit about including hymns for particular occasions, for instance, just so I could get a few more of my favourites in. And I think people have just included links so that others can hear why they like a particular hymn so much - some people include them, others don't. Just have fun wildly singing a few hymns out loud while you work on your choices (come on, Mac, admit it - I KNOW you did!).

I did NOT sing some of them...

Well i'm not averse to a couple of modern hymns. At our wedding Andrew & i had 'As i kneel before you' & it always brings tears to my eyes.Tears of joy that is! i love 'Bring flowers of the rarest' having crowned Our Lady to this hymn when i was 7. i remember it like yesterday.

ps Faith of our Fathers..one line features on my tool-bar..

Jackie, not one of the hymns you mention is "modern"... and I like all of them (I did say it was hard to choose!)

Now the Green Blade Riseth is a favorite of mine also. I hadn`t realised it was so recent. The melody is 15th century.