While checking out Simon-Peter's blog, I came across a reference to Sophia which mentioned that she was having surgery. On further exploration, it appears that Sophia has a brain tumour. She is very small for her age (7 years) - the tumour was discovered a couple of weeks ago by doctors who were trying to figure out a cause for her small stature. The tumor is wrapped around her pituitary gland and her optical nerves. They expect that it will take three operations to remove the tumour, and she is probably going to lose some or all of her eyesight. The first operation was scheduled for Tuesday, 13th February. From what I gather, Sophia appears to be making good progress, though there have been one or two scares along the way. 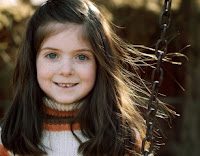 There was a request to pass this on to anyone who is willing to join in prayer for her. Pray for a miracle for Sophia. Pray for her team of surgeons.

Updates also seem to be being posted HERE.
Posted by Mulier Fortis on 19.2.07

My prayers, my prayers.

Thank you for posting this! The prayers are greatly appreciated.