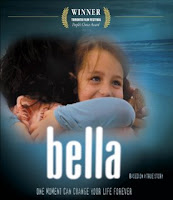 There seems to be a new film coming out... I'm intrigued, because I hadn't heard anything at all until I spotted a description on American Papist.

In his review, Thomas says that the producer, Leo Severino, told of leaving a prosperous career as Latin American business mangaer at Fox studios to begin Metanoia Films (Greek for conversion). "I wanted to make films that if the Virgin Mary sat next to me during the screening, I wouldn't have to cover her eyes." Now that's what grabbed my attention... I'm tired of having to judge how much sex, nudity and bad language I'm likely to have to tolerate when choosing a film to watch.

For me, one of the best quotes in the trailer has got to be the last line: "If you want to make God laugh, tell him your plans." Sooo true!

You can see the trailer for the film HERE - but be warned... it doesn't exactly explain anything!!

Sorry, Mac. Much as I'd like to, I can't make the trailer load. Any hints?