Surprise, surprise! Lent begins here. It doesn't matter how "well" I prepare for it, it always seems to sneak up on me. 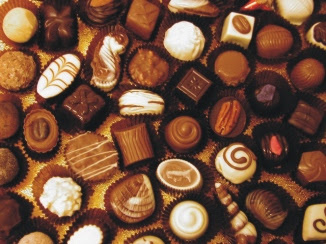 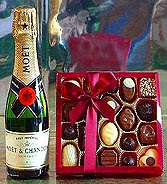 Before Advent, on being encouraged to do something penitential by my SD as preparation for Christmas, I did ask about giving up alcohol - he wisely pointed out that, since I don't tend to drink that much on a regular basis (I will not drink at all if I am driving anywhere, and I nearly always drive), giving up alcohol alone wasn't actually much of a sacrifice. Before I stopped to think, I blurted out "Oh, if it's something I'll really miss, it has to be chocolate then..." and then sat there wishing that I'd kept my mouth shut! But, the promptings of the Spirit and all that...

So, it seems obvious that chocolate is one of the things to go during Lent. And only on Ash Wednesday do I wake up dreaming of chocolate... Blogging has made things much, much worse. I have lost count of the pictures of chocolates I have drooled over today! Nearly every Catholic blog refers in some way to what the blogger is going to do for Lent: however, this is also really encouraging, because out there in the big, bad, secular world, if you say that you have given something up for Lent, you often encounter pitying glances (from atheists and agnostics) or downright hostility (from liberal Catholics, who say things like "Oh, how very hard-line... Lent isn't about giving things up, it's about doing something positive...")

I have to confess to a certain lack of charity when presented with that view... yes, Lent isn't just about giving something up, but it is about observing all three areas of penance, prayer and almsgiving. And penance is meant to be a sacrifice, for the love of God. That is positive. It also forms part of our training for "spiritual warfare" where we exercise mastery over our physical passions. Also positive. Since I can't find a hairshirt in my size, penance will, by necessity, involve cutting out the treats I enjoy. Giving up Brussels sprouts isn't really an option, since sprouts, in my humble opinion, rank just above cockroaches in the order of creation...

Anyone else who has a smidgeon of faith (Muslims, Jews, Anglicans etc.) will accord you silent respect for observing some sort of sacrifice. Other Traddies will, of course, eagerly compare notes about what, exactly, you are doing, and how many times you've slipped up, and whether Sunday counts...

So to all of you out there contemplating the start of your Lenten penance: Good luck, and God bless!
Posted by Mulier Fortis on 21.2.07

What about chocolate-covered brussel sprouts?

Reluctantly, I shall have to give them up also...

...yeurghh, what a vile concept!
*shudders*

Just kidding. I already miss my sweets and my snooze button though. And it would figure that the Girl Scout cookies I ordered in December were sitting, newly delivered, on my desk this morning when I got to work...

"Other Traddies will, of course, eagerly compare notes about what, exactly, you are doing, and how many times you've slipped up, and whether Sunday counts..."

Yes, I've noticed this, I was expecting it too. On the one hand it helps boost each other, on the other...it sort of bothers me.

Anyway, I have to go to the doctors late tomorrow afternoon to have some bloodwork and my heart checked out. Well, yesterday & today I was called to remind me to show up, both times the issue of fasting before the drawing of blood arose. Both times I just sighed and said, "I'm Catholic, it's Lent, it's not a problem." Both times the response was a non-sniffy "very good, then you'll be fine"...the point? This state is 96% protestant...heavy in the going to church business, and *not* of the Anglican-Lutheran kind. I was amazed.

Me too. I also intend to abstain from chocolate until Easter Sunday. Solidarity, Mac!

For me its crisps not chocolate! Giving them up for Lent will be a real test lol

I don't go for the "Sundays don't count" rather defeats the object in my opinion.

I hope all goes well for you this Lent

I was going to post something along these lines: 'Lent isn't about giving things up, it's about doing something positive'

But now I'm afraid to.

I think that as long as there's no false dichotomy being imposed between giving something up and doing something positive, then there should not be a problem.

In doing something positive, we are also giving something up. It could be giving up your time in volunteering to dust off the Church or scrape the wax off the candle sticks or cooking at the homeless shelter or visiting the sick and the lonely. These are also spiritual and corporal works of mercy.

It giving up your pride in emptying bedpans at the hospice or washing cars to raise funds for the poor. It could be giving up your comfort by taking the bus around and donating the cab money to the poor.

There's just some much to give up while doing something. And giving up your time and your comfort and your pride can sometimes be more difficult than giving up sweets =)

Andrew, you're right... giving something up can be a positive thing, and giving up time may (for some) be more valuable as a penance...

...what I was having a go at is the liberal attitude of "oh you shouldn't give up chocolate/alcohol/whatever because it's so hard-line and negative..."