The only two bloggers willing to pose for photos at the excellent Guild of Blessed Titus Brandsma meeting back at the end of November were the two priest bloggers, Fr. Ray Blake and Fr. Timothy Finigan... 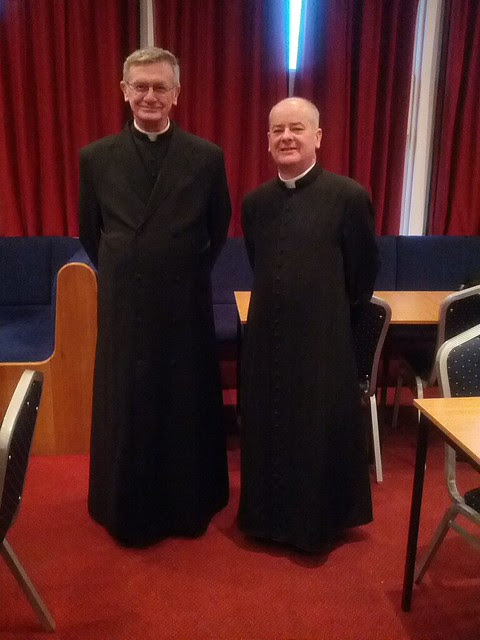 I've been snowed under (and very stressed) at work, so hadn't gotten around to blogging any sooner, but there have been other first-class reports of the proceedings from Richard Collins (aka Linen on the Hedgerow) and from the lovely Bones (Laurence England.)

Lunch was provided by Annie Elizabeth (Defénde Nos in Proélio) though I almost caused a major diplomatic incident by refusing to eat the pea and ham soup (on the basis that I loathe vegetables in general, and pulses in particular) and so was very nearly banned from having the sticky toffee pudding... She relented when my lip started to wobble (Annie's sticky toffee pudding is legendary!) but I suspect that I am paying for it now with a very bad cold (which Annie will, no doubt, inform me would have been avoided if I'd eaten my veg!)

The talk was a subject very dear to my heart - some of the miracles at Lourdes - given by Dr. Adrian Treloar. I did my best to live-tweet some of the main points. Adrian asked me to give the Catholic Medical Association a plug: something which I am more than happy to do. The CMA is responsible for producing the journal, Catholic Medical Quarterly, which is being made available online. As it happens, the May 2013 issue has an editorial by Alison Davies, a staunch defender of the pro-life cause who died just a couple of days after the Guild meeting. You can read more about Alison Davies over at Fr. Finigan's blog (he gives further links.)

Eccles also has posted an amusing account of the Guild meeting, courtesy of his Anti Moly...
Posted by Mulier Fortis on 8.12.13

Why has Fr Finigan got a blue light sabre above his head?

(I was pushing my luck getting them to move to the best spot for the photo, and I forgot to photoshop out the gap in the curtains!)

Blue Lightsabre is one of Fr.Z's liturgical weapons.

I was thinking you'd died a few deaths when you realized the main was either split pea and ham or spinach soup. Well done for not throwing yourself on the floor. Snaps for not having Dominoes deliver. Look forward to getting down to Brighton this summer.