The end of the Year of Faith was marked by a Mass where relics of St. Peter were brought out for veneration for the first time since they were unearthed in the 1940s.

The BBC, with typical lack of sensitivity towards the beliefs of billions of Catholics around the world, put up a headline which read "Pope puts 'St Peter's bones' on public display." The quote marks around St. Peter's bones indicate clearly that the author of the piece doesn't agree in their authenticity.

I haven't seen the relics themselves, obviously - they've only just been brought out. I have been down to the tomb - or rather, the chapel where the tomb is. Looking at the maps of the Vatican Grottoes, I see that this is the entrance to the Confessio, and I think that the remains of St. Peter are (or were) behind the grill by the mosaic of Christ. If I'm right (and I'm very bad at following maps, and have a lousy sense of direction), the grill actually backs onto another chapel - the Clementine Chapel - which we didn't go in to because there was a Mass being celebrated at the time. It was a spine-tingling moment being even that close, and I was almost in tears. Fortunately I pulled myself together and got some photos, which you can find on my Flickr set. 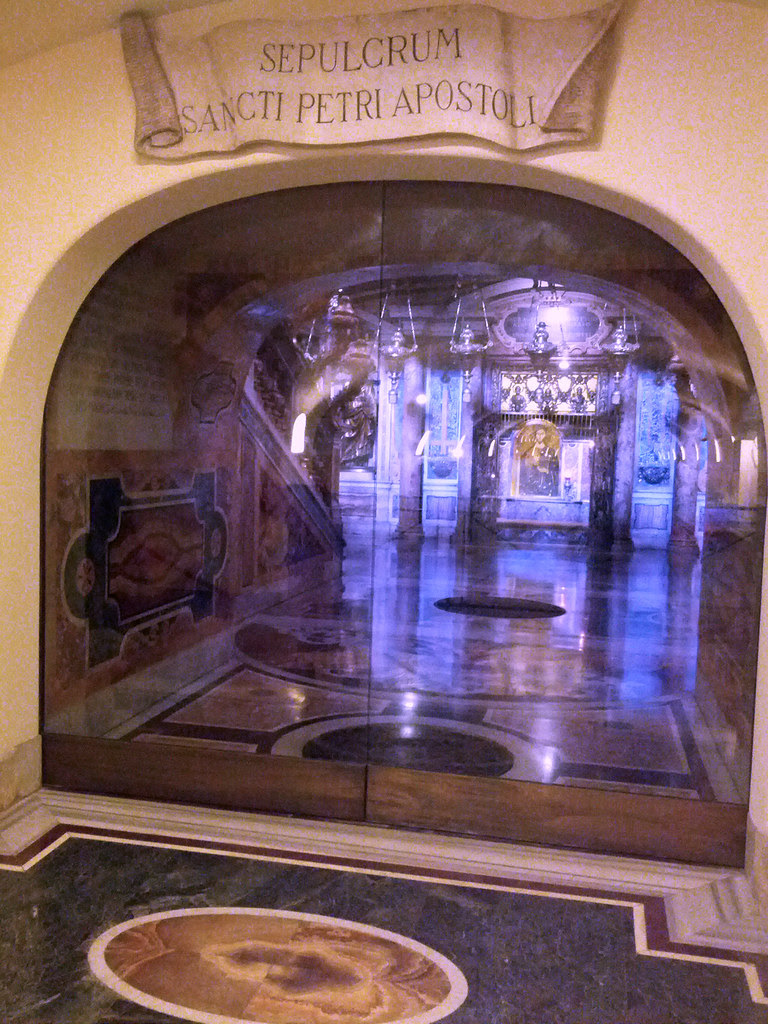 Throughout the history of the Church, the location of St. Peter's remains has been said to be under St. Peter's Basilica... underneath the High Altar, to be precise.

When excavations under St. Peter's were carried out, they discovered a tomb below the High Altar with "Peter is here" (or words to that effect).

The Church hasn't been around that long - 2000 years, give or take. 266 Popes - and we know the names of all of them. Something as important as the burial place of the first Pope is likely to have been passed on with great care. So finding remains labelled "Peter" under the High Altar of St. Peter's Basilica shouldn't come as any great surprise.

Of course, no one is obliged to believe that the bones belong to St. Peter...
Posted by Mulier Fortis on 26.11.13

They give one some ideas for the
proposed Minor Basilica at Blackfen !!!

Have you never done the Scavi tour, Mac? It ends in a little room adjacent to the Clementine Chapel, and they leave you to pray in silence in the presence of the relics. The atmosphere is awesome (in the proper sense of the word).

Great pic of the Confessio - I've never dared try, being intimidated by the notices saying "No photos".

No, I was just tagging along behind FRS Finigan & Briggs... No sign of a tour guide (it was early in the morning).

I didn't see any signs saying no photos - I guess it helps that I can't read Italian - and the absence of other people (the place was empty apart from a few services going on and I didn't go near them!) made me braver... It helps that there wasn't a flash on my phone camera...

How fortunate to be able to visit the crypt early in the morning in the company of priests - they don't let us ordinary muppets until all of the Masses have finished at 9 or so, by which time they have switched on the blasted tannoy that tells us in multiple languages to be quiet - thus destroying the atmosphere.

The Scavi tour is someghing else - you have to book ages in advance, and they take you to the necropolis underneath the crypt. It's an amazing experience, made even better if you get a guide from the NAC - they're brilliant!

When we had a Vatican exhibit visit a few years ago, there was a display on St. Peter, indicating they'd excavated and, sure enough, just where the Church had said he was buried, there he was.

Two years ago I went to the Funeral Museum in Houston, TX, which, in addition to sharing a history of funerals in the US, has a display on papal burials, featuring a replica of Bl. John Paul II's tomb. There's also a copy of the triple wrap (3 coffins), and details such as the scroll on which his accomplishments are listed and the "here lies" sign. If you're ever in Houston, I highly recommend it.

In addition, there's a display on Egyptian embalming, Civil War era burials and Victorian mourning traditions, brightly decorated, fun shaped, Ghanian coffins, Presidential funerals, historical hearses, including a small scale replica of that of King Louis XVIII, donated by France as the museum helped to restore his hearse for display at Versailles. If you're ever in Houston, I highly recommend the museum.