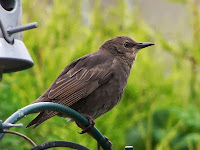 If it's the same as the bird to the right then it's a starling :)

That photo was on a bird page and labelled blackbird... though it isn't a perfect match. Starlings have speckled breasts, I think, though I'm no expert...

Starlings only develop the speckled breast as they age. The long beak gives it away as a starling :)Bird nerd here....

Your Blog's better than EastEnders !!!

Possibly a female blackbird - they are dark brown, inc. beak. You might just have saved a nest full of little 'uns. Oh, the pathos.

The kitty kill count at Catcliffe so far this year is mouse: 4 and chipmunk: 1. Two mice and the chipmunk are attributable to the male, one mouse to the female, and the last mouse unattributable (found deceased on the walk; I saw the other victims as they were being attacked by the cat). No birds or baby bunnies yet, at least that I've seen . . .