A Blessing For The Parish... 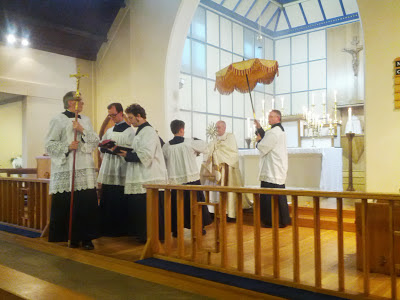 At Blackfen we have just concluded our celebration of the Forty Hours, or Quarant' Ore. This is where Our Lord is exposed in the Blessed Sacrament continuously over three days (it may not add up to exactly 40 hours.)

Zephyrinus has an excellent summary of the running order. We are really blessed to have the Forty Hours as an annual event (we started it in the parish in 2009.) We used to have it in October, just before half term, which meant that I had the holiday to recover and get my sleeping pattern back on track. Unfortunately October is rather a hectic time at Blackfen, and Fr. Finigan decided that he would move things to the summer months... which is why it is only seven months since our last Quarant'Ore.

Because we end the whole thing on the Saturday (and I don't work on Saturdays), I try to stay to pray overnight on the Friday. It is difficult to explain how wonderful an experience it is to pray before the Blessed Sacrament in the early hours of the morning - even though I wasn't the only one present, it felt as if it was just me and Him... and the time really flew by (except for that bit between 6:30am and 8am which lasted forever.) 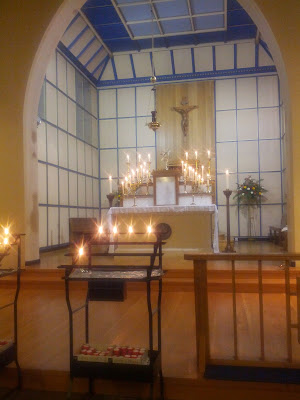 Being in possession of a particularly fallen nature, despite being in the presence of the Almighty I get distracted rather easily. I couldn't help making comparisons between the experiences of night-time adoration in October and in June. October, unsurprisingly, came off rather unfavourably. It's colder, for a start. This means that sitting still for any length of time is rather arduous. The heaters being switched on full causes the candles to burn down and gutter in rather odd ways, necessitating several changes during the night (hassle) and much wax removal from stuff afterwards (more hassle.)

Dawn arrives much earlier in June, as does the dawn chorus. Those birds make one heck of a racket at 4am. I'm surprised that His Hermeneuticalness manages to sleep through it, and it occurred to me that he might appreciate the loan of my two kitties...

My attention was caught by a knothole in the wood by the Communion rail. As the daylight levels increased, it gradually dawned on me (*ahem* sorry - couldn't resist!) that the knothole was actually a spider. A very large spider. 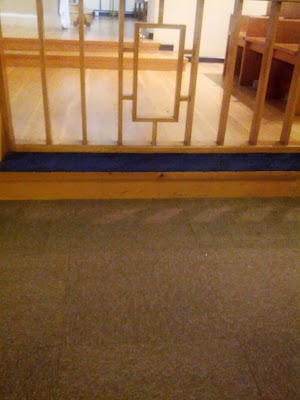 I watched it for a bit, and then had visions of it crawling up my leg when I went to Communion. I wasn't too keen on that idea, and so decided to take action. The judicious application of a hymn book soon sorted the problem (I deliberately used a hymn book as it has a plastic easy-wipe cover, not because I thought the spider would die of fright when confronted with Colours of day or If I were a butterfly!) 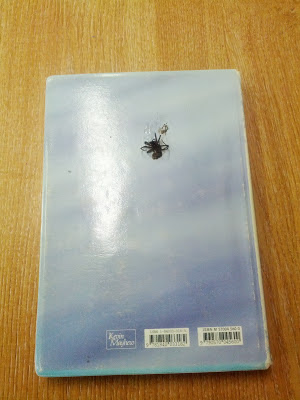 There was only one other person present at the time, and she appeared to think my action was eminently sensible.

The cats were not amused by my overnight absence, and made their displeasure known in no uncertain terms. When I finally arrived home (after a very good lunch) I discovered that a dead pigeon had been deposited on my sitting room floor... 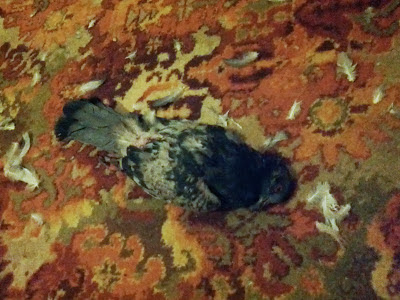 Yup. Not quite sure why he made spiders - or cockroaches...

That's an enormous spider! :-o
More importantly: yes, no matter how many people are present, it is like being alone with the Lord.

If the things with wax on them can be put in the freezer, the wax will come off easily. If they can be ironed, place a paper sack underneath and one on top and iron the wax onto the sack.