One Mantilla Does Not A Traddy Make... 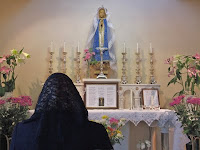 ...Heheheheh... It seems that one has to have a spare in the glove compartment. I have two. Does that make me an uber-trad?


"The women have an extra mantilla in the van - just in case. The men have an opinion on the best type of pipe tobacco for any occasion. The boys have their own cassock and surplice hanging in the closet. The girls know how to play Dies Irae on the organ. They wear a t-shirt while they go swimming so their brown scapular doesen't float away. They're willing to drive an hour to go to Mass... every Sunday.

They know the confession times of at least 4 churches. They invite priests over to play cards and smoke cigars. They pray to saints that you think may not really exist. They ask you to finish the sentence when you say "John Paul the Great"... the great what? They might own a live chicken. When they're at a Novus Ordo Mass, everyone watches them to figure out why they're hitting themselves during the "Lamb of God"."

Clifford, over at Ecce Homo has scored himself an "A" on the Trad Scale found by The Rockin Traddy and drawn up by The Reluctant Traditionalist and Wholly Roamin Catholic.

Do you get the impression that I've been having a little holiday fun checking out some new (to me) blogs?

Just one question: What's a tinfoil hat joke?
Posted by Mulier Fortis on 13.4.11

A tinfoil hat joke refers to people who are paranoid and utterly terrified that someone - or something - is going to magically read their thoughts or brainwaves. In general, though, it refers to paranoia brought about by absurd ideas (e.g. aliens, mindreaders, etc).

"They know the confession times of at least 4 churches. "

I used to get a laugh over the amount of texts I got from people in Belfast, not only when I was actually in Belfast but also when in Norway, asking mainly about Mass times, but also I believe confession times, of varius chapels in West Belfast and the city centre, to which my overview would extend.

"They're willing to drive an hour to go to Mass... every Sunday."

Well, where I live now, the only way to get to Mass at all is to drive about 50 minutes in the summer, turning sometimes to an hour and more in the winter. So, I'd be more than willing to drive an hour on Sunday for a TLM!

I'm, perhaps thankfully, a bit confused at this one as an identifier of anything. I used to think everybody did that at whatever form of the Mass they assisted.