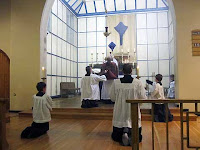 We have been really blessed at Blackfen to be able to have Mass in both forms during Holy Week. I prefer to attend Mass in the Extraordinary Form if I am given a choice, so, after the marathon of Palm Sunday, I had a luxurious lie-in on Monday morning (much to the disgust of the kittens, who wanted the cat-flap (and the cat food) to be opened at silly o'clock) and I went to Low Mass on Monday evening. Tuesday provided me with another opportunity for a lie-in, but I figured that it would be needed, as the Missa Cantata held in the evening included an extra Lesson and the singing of St. Mark's Passion.

Given that it was an evening Mass, the thirty minutes needed to chant the Passion proved a little too much for one young parishioner - his gentle (but penetrating) snores were most poignant when Jesus was upbraiding the disciples in the garden of Gethsemane... 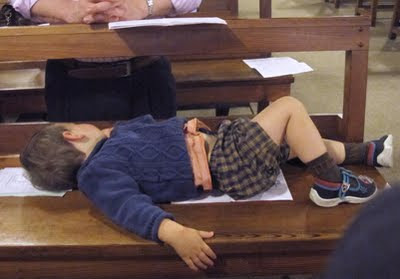 The next morning was less relaxing: we had Low Mass at 7am. This meant I had to get up at 5:30am so I could feed the kittens, wash, dress and drive to the church early enough to help set up. The children present were full of the joys of Spring, the adults, on the other hand, were looking somewhat the worse for wear. 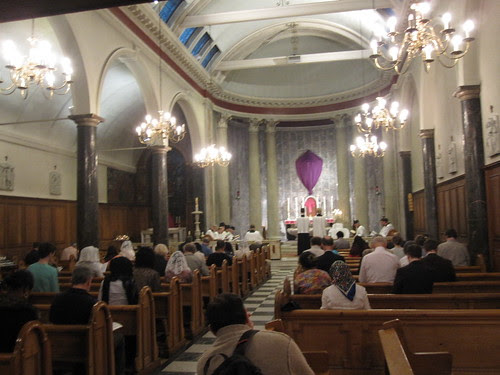 I wanted to go to Tenebrae at St. Mary Moorfield's in the evening, but I hadn't ever been to that church, and was a little doubtful about driving in. I considered going on public transport, but my knee and ankle have been playing up a lot, and I didn't relish the hassle which would be involved, especially for coming back afterwards. I printed off the route (via Google Maps) and set off.

I almost turned around again because of the traffic queues on the A2 - the Blackwall Tunnel was backed up right the way to the Sun-in-the-Sands roundabout. However, I was hopeful that the traffic would clear once I got across the river, and this proved to be the case. I got close and estimated that I'd be about 15 minutes late...

Somehow or other I took a wrong turn, and got hopelessly lost. After driving for another 45 minutes, confused by one-way systems and massive roadworks, I finally found the church. I suddenly realised that I'd driven past it about half an hour before... possibly twice... 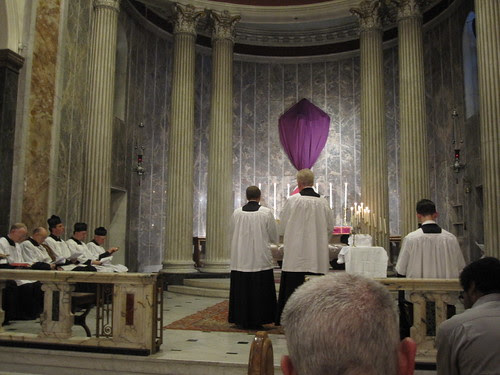 I crept in at the back, an hour late. Fortunately, this being Tenebrae, we were only somewhere in the Second Nocturn! (Ok, I probably got that wrong, but the service did continue for another hour and twenty minutes!) The music was a mixture of plainchant where the congregation got to join in and heavenly polyphony sung by Charles Finch's music group.

At the end, I asked if it would be ok to put my photos up on the blog, and permission was granted - I like to ask when I go somewhere new. 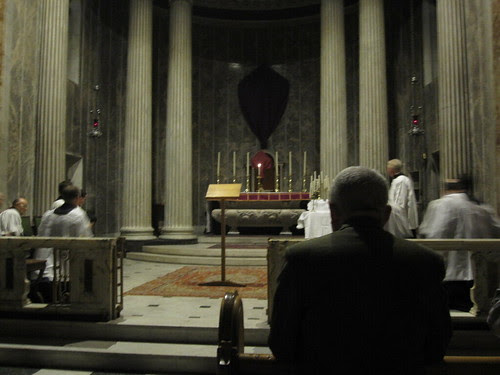 The journey home was even more fraught than the journey in. Jonathan (Blackfen's Senior MC) offered to act as navigator, so it was straightforward enough (although traffic was unusually heavy) but, despite warnings that the southbound Blackwall tunnel would be closed from 21 April, we found that it was closed a day early... it took two hours to get back to Blackfen! I was a little concerned that the kittens would be out gallivanting (I hadn't closed the cat-flap before I left) and might have become fox food, but they were both waiting to greet me as I opened the door.

You can see more photos of Tenebrae at St Mary Moorfield's on my Flickr page.
Posted by Mulier Fortis on 21.4.11