His Hermeneuticalness On The BBC... 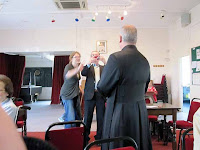 A couple of weeks ago (the Feast of the Assumption, to be exact) a couple of people from BBC Radio 4 came to Blackfen, making a programme for the run-up to the Holy Father's visit.

In addition to recording the Mass, they wanted to speak to parishioners. Unfortunately, I got roped in... heaven only knows what they'll make of my interview. I liked Mark Dowd, but I was struck by the extremely negative body language of the sound engineer/producer, Helen somebody-or-other.

I figured that it wasn't going to be exactly positive when I got asked about the problems we'd had in Blackfen when Fr. Tim introduced the Extraordinary Form of Mass into the Sunday schedule, and I got asked about why we didn't have collections for CAFOD (I made a booboo of colossal proportions when I confused Haiti and Thailand: they promised not to use that bit) and whether people calling for women priests could still be called Catholic...

Several other people were interviewed, and I'm sure that they acquitted themselves better than I managed. Fr. Tim was interviewed separately, possibly because of escalating noise levels in the club, or possibly because of time constraints on the Sunday. I became even more convinced this would be a hatchet job of the first order when I heard that the whinger-in-chief (Bernard Wynne - he of Catholics for a Changing Church, Stand Up for Vatican II and Catholic Voices for Reform) and Elena Curti of The Suppository had also been interviewed.

The blurb doesn't give me much hope either...

Anyway, the programme is going out tomorrow. The Pope's British Divisions is on Radio 4 at 9am - unfortunately, I'll be busy at that point. It's being repeated at 9:30pm, however, so several of us are going to attend the usual Thursday evening Rosary & Benediction and then go into the Parish Club and ask for the Sky channel to be switched to Radio 4.

I like Dowd too. He's an ex something or other ( Dominican?) and I think I read that he is gay and attends the controversial Soho mass. Suffice to say he's pretty liberal. But when i saw a documentary that he did on Opus Dei ( in the wake of the Da Vinci Code ) I was surprised by how warmly he came across. I think he was very fair and not at all sneery. He struck me as quite a sincerely kind person, not given to mocking. I hope that impression is correct and that he does Fr F and your parish justice.
I thought the blurb was quite intriguing. It will be interesting to see where they go with the gay masses story especially given that he is ( I think) one of the congregation. I know I'll simply be too busy or forget to listen in.
I hope we can get it on archives, do post a link if you have one.
( And by the way, well done for being interviewed, it takes a bit of guts)