His Hermeneuticalness is treating the Parish to an examination of the Creed through his sermons at Mass, article by article. This is no lightweight introduction: three weeks in, and we're still on article one.

Yesterday's sermon concentrated on the existence of the angels, and it gave me plenty of food for thought, some of which I hope to share with you here.

It was fascinating to be reminded that the fallen angels have already been vanquished by Christ, through his Passion, Death and Resurrection. C.S. Lewis, in his classic, The Screwtape Letters, pointed out that we are apt either to disbelieve in the existence of the devil altogether, or to believe in him too much, and take an unhealthy interest in him. It is too easy in the current climate to allow oneself to think of the devil as the opposite of God, and therefore view good and evil as opposite sides of the same coin. But the devil, as the first of the fallen angels, is merely a creature, and is therefore subject to God's authority. 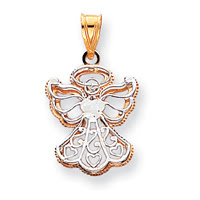 Even though the fallen angels are more powerful than all the tanks and bombs in the world (as an acquaintance of Fr. Tim's described it - after having had the experience of meeting one) the good angels are more powerful still, and they will come to help us if we ask. They are not to be confused with fairies or good luck charms - Our Lady was frightened when she encountered St. Gabriel, and had to be reassured. That is one of the reasons I like the portrayal of the archangel in Franco Zeffirelli's Jesus of Nazareth as a bright light, only visible to Our Lady herself, and also I like the picture by Henry Tanner - though I don't think much of his Virgin Mary! 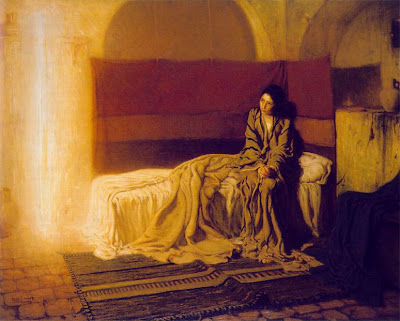 I found Fr. Tim's description of the devil as a chained dog particularly helpful. To any baptised person, the devil has been banished by Christ, and is like a chained dog. However much the dog may snarl and bark, he cannot hurt us... unless we get too close, within the reach of the chain, or worse, actually unchaining him. That is what we do when we dabble in the occult - in tarot cards, crystals, ouija boards, fortune telling, spiritualism, seances and so on. When I was a child, a "magic" shop meant somewhere to get juggling balls, books on card tricks and stuff like that. Now it has a very different meaning, and tarot cards and spell books are on sale in the High Street, marketed for susceptible teenagers.

We also need to pray more to our Guardian angels, and also to the Guardian angels of those we love. I find it inexpressibly comforting to think that I have my very own angel, whose sole aim is to help me get to heaven. Finally, we need to use that prayer to St. Michael, composed by Pope Leo XIII after a vision which left him white and shaking:

Holy Michael the archangel, defend us in the day of battle.
Be our safeguard against the wickedness and snares of the devil.
May God rebuke him, we humbly pray, and do thou, O prince of the heavenly host,
by the power of God,
thrust down to hell Satan, and all wicked spirits
who wander through the world for the ruin of souls. Amen.
Posted by Mulier Fortis on 12.7.10

Brilliant. Maybe he could come down here when he's finished and do it all again?

The Latin version of the "Leonine" prayer is very powerful; Satan is said to hate Latin:

I also commend the book "Angels and Demons" by Peter Kreeft. It is a very enlightening experience to see him relate Scripture to angels. It is not for affect that angels often begin by saying "Be not afraid!"

I like the picture of the chained dog; one like that was unchained and had our dog by the throat and was shaking it! So not a good idea to unchain the devil in our lives either! We might get more than we bargained for.