I am a tremendous fan of Agatha Christie's novels, especially the ones with Hercule Poirot. I always found Miss Marple a little more difficult to take because of her genteel elderly English spinster ways, but Hercule Poirot, being more Continental, appealed to my nature (I'm half German.)

However, I could never quite picture the moustaches which Christie described as fascinating everyone who saw them. These moustaches made Poirot instantly recognisable... and also made people wonder if he was a hairdresser. Moustaches, in my experience, were simple affairs which adorned a gentleman's upper lip, ranging from Hitler-esque toothbrushes to long caterpillars which extended down to join with a beard. If the moustaches were flourishing, they might be more bushy, as worn by Stalin, but that was pretty much as far as my imagination took me. The film portrayals of Poirot did very little to help. Peter Ustinov, in my opinion, was definitely not Hercule Poirot, and the pictures of him on the cover of my copy of Death on the Nile used to irritate me beyond belief.

When David Suchet started to play Poirot for the TV adaptations, I thought it was a bit closer to the mark. Suchet had succeeded in portraying all the fussiness described by Christie in her novels. But the moustaches still didn't make any sense. Why did Poirot have to struggle to keep his moustaches out of the soup? Suchet's moustaches didn't look as if they would go anywhere near soup unless it was of the cup-a-soup variety...

And then, after the Pontifical High Mass at the end of June, I went to the Buckingham Arms for a little liquid refreshment. As I ordered my pint of "novus ordo Eurofizz" (that's lager, in case you were wondering) I found myself confronted by the most impressive pair of moustaches, I have ever seen... waxed at the points and flourishing profusely... so much so that I asked permission to take a photo. 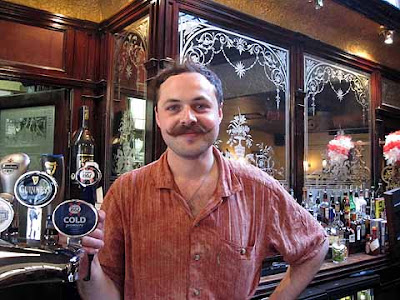 There is some sort of society for gentlemen who like to grow "proper" moustaches, apparently...
Posted by Mulier Fortis on 13.7.10

Indeed there is, Mac; and in fact there is a biennial contest on a global scale for the most spectacular beards and moustaches . . . our friend at The Buckingham would, I fear, do no better than an 'honourable mention' going by the photos I've seen !

You'd enjoy Rajasthan, where moustache-growing appears to be a sort of competitive sport . . . I've seen them a foot across there.

I love Hercule Poirot!
A truly continental gentleman!
And, yes, fussy.
He is, after all, Belgian, not French!!:<)!

But... did you see a picture of John Moffatt the BBC Radio Poirot? :-)

I think his appearance is the best Poirot 'till now.