Those Pesky Questions About Rubrics... 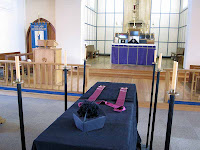 We are extremely fortunate, at Blackfen, to have a senior MC who is very hot on the rubrics of Mass in the Extraordinary Form, and sundry other liturgical events. He isn't infallible, but I would tend to assume he was right until someone could prove otherwise.
In my post about Fr. Koch's Requiem Mass, Dominic Mary (of Libera Me fame) questioned the arrangement of the biretta and stole on the catafalque, pointing out that the "head" end should have been nearest the altar, as is usual for a priest's coffin.
Well, the MC has spoken: a priest's coffin is placed with the head nearest the altar, but not when the body of the priest is absent (as for the Mass at Blackfen) ... and what's more, Jonathan was able to substantiate his claim with chapter and verse from O'Connell... (The Celebration of Mass
Volume III, Chapter XVII, High Mass For The Dead: Appendix, The Absolution For The Dead, p178...) 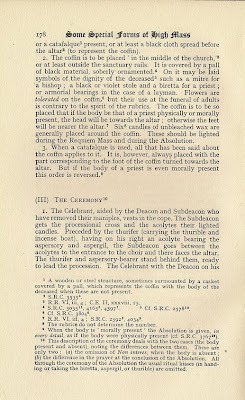 I have to say that I am a little puzzled by what is meant by a body being "morally present"...
Posted by Mulier Fortis on 14.3.10

"I have to say that I am a little puzzled by what is meant by a body being "morally present"... "

Well, it should have been in there guvnor, but we lost it on the way here...

J.B O'Connell must have been the most boring sod who ever lived but he was a master of the Rubrics...

O'Connell sates: "The body is said to be present morally, when for a reasonable cause (i.e. fear of contagion, impossibility of keeping the body unburied for the time that would necessary) the body cannot be brought to the church for the funeral service (the funeral Mass and the Absolution), and this even though the body is already buried."

I assumed that your splendid MC would have an authority for it, and I'm delighted to know what it is.

My only excuse for starting that particular hare is that it is not absolutely clear in Fortescue's entry on High Mass for the Dead - and I foolishly hadn't bothered to look at 'Funerals', where it is covered by a footnote showing that it was a Decree of the SRC dated 20 June 1899 !