As I said in a previous post, I renewed my vows on Saturday. I first made my vows seven years ago, and I can honestly say that I haven't regretted my decision, not even once.
Of course, having lived the life for seven years, I sometimes forget how strange my decision might appear to others, especially people who don't go to church themselves. This was really brought home to me this year...
First of all, there was my conversation with my hairdressers. The senior stylist has known me for a few years, so she knew the general score, but the junior who was assisting her wanted to know if I was a nun... once I'd cleared that one up, I then had to explain that no, this wasn't the reason I always wore black... I just liked wearing black.
While waiting for my hair tint to develop, I thought I'd treat myself to a manicure, as the beautician at the salon wasn't busy... nothing fancy, no false nails, just a moisturising treatment for the cuticles, the nails shaped and polish applied. She also asked what I was up to at the weekend. On hearing that I was a Catholic, she started to tell me that her boyfriend was a lapsed Catholic, and they were considering marriage, but the young man's family told her that she had to be baptised Catholic before they could marry in church. I quickly put her right on this point, and we spent about half an hour discussing marriage, the need for Catholics to marry in church, the cost (minimal) of marrying in church, vows, children, baptism, living in sin, divorce rates among people who didn't cohabit, the need for Confession and faith.
Saturday morning dawned, and I phoned for a cab, as I intended to have a drink at the party after the service. The driver was one who had collected me several times before (I'm a creature of habit) and he was keen to know what I was celebrating.
On hearing that I was renewing my vows, he looked puzzled. "Isn't your other half supposed to be with you when you do that?" he asked, "...or is he already at the church?"
I explained that my "other half" was, so to speak, God. Watching his expression (in the driver's rearview mirror) was very entertaining... I could almost see the thoughts churning round, followed by a hesitant "But... if you don't mind me asking... does that mean that you can't have a boyfriend...?"
The journey was, mercifully, a short one (15 minutes), but we managed to touch on vows, sex outside marriage, Original Sin, the variety of different religions and denominations, Henry VIII and the Reformation, death, judgement, hell and heaven. I'm not used to quite so much theology before 10am! 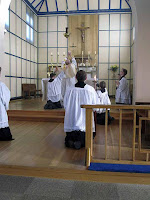 The Missa Cantata was wonderful as usual, and the schola sang beautifully.
We had a short service of Benediction; I love this devotion - something about how God abases himself before us, the creatures He loves so much, as He condescends to appear in the form of a little fragment of bread...
And after Mass, we had the service where I renewed my vows. First, we had a reading from St. Francis de Sales: a short passage which seemed to be written especially for me. Fr. Tim gave a short sermon, but I'm afraid that, although I remember it being excellent, I was so moved by the whole thing that I can't remember any of it. I do seem to recall that vocations were mentioned!
The schola intoned the Litany of Saints. I had brought my St. Andrew's Missal with me, and was fascinated to discover that St. Hieronymus is Latin for St. Jerome! There were some more prayers, the vows themselves, and sprinkling with holy water... and there I was, "done and dusted" for another year.
Members of the Parish UCM had agreed to take care of the catering, and I think you'll agree that they did an amazing job... 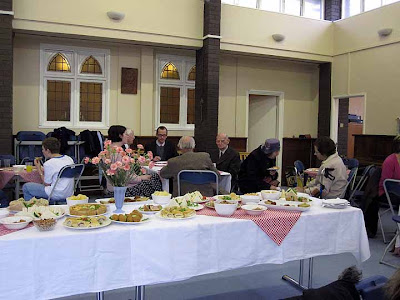 Delia insisted on taking a photo of me. I agreed, only because she said it would be from the back, and on my camera. It was a ghastly photo, and I've deleted it... (sorry, Delia!)
I had a beautiful day, and would like to thank everyone (present in person or in spirit!) for their kind comments, messages of support and prayers.
Posted by Mulier Fortis on 6.12.09

Ah, but Mac, you never like anyone taking your photos... you'd think there was a secret campaign to... well, there isn't is there!? ;-P

Cool! What a loving community!

Mark, I can think of two places where her photo was, but I'm not telling.

I must admit I was very sad not to be able to attend, but better luck next year. Give me six months notice of the date then there will be no double bookings.
The food looked great.

Forgiven, but the problem would have been the camera operator, not the subject! Just can't seem to take decent pics with a digital camera – always seems to wobble.

I found the vow-renewal ceremony very moving, and the spread was delicious. Sorry I had to go, and didn't even have a chance to greet Fr Tim!

Dear Mulier Fortis. As previously said, I was so sorry to miss your big day. When I saw your photos of that beautiful spread put on by the UCM, under Hilda's direction, I was MORTIFIED !!!!!! Please give me a couple of months' warning next year, I don't want to miss it all again. Many, many congratulations. In Domino.

Praying for God's blessing upon you for another year.
Mrs.P

May the Lord bring to fulfillment the good work He has begun in you!
Prayers, blessings and congratulations on your vow day!
Our association of the faith has vowed single persons, men and women, who live in the world but live a contemplative life.
May this wondrous vocation prosper in our world of such darkness and misery. Happy feast of our Lady!

Hi i Made a private vow to remain chaste for the rest of my life.
There were no witnnesses.
I also vowed to be a woman of prayer. I made the consecration in my ROom with an image of the divine mercy.
Does anyone know if this is valid

I made my private vows in public, but private vows are totally between the individual and God, so no witnesses are necessary to make them valid. I would advise that you get a good spiritual director, to help you keep on track, but even that isn't necessary: you have made the vow to God. Good luck, and God bless.