Christmas Preparations Back On Track...

There were several children at Mass this morning, and I could sense the rising excitement, which was, I have to admit, infectious. I was, as a result, feeling less Scrooge-like than I did after yesterday's débacle. Nevertheless, the thought of battling against hundreds of highly excitable children and their exhausted and frazzled parents meant that I set out for Bluewater with more than a little trepidation!
My favourite car park was pretty full, and there were several cars circling, like barracuda round an inflatable dinghy, but a quick prayer to St. Joseph resulted in me finding a prime spot, much to the disgust of another motorist who had also spotted it, but who was trying to sneak in by driving the wrong way... as I had the right of way, I scooted in. Hah!
There were a few items I knew I had to buy, and I headed for those shops first. Some places were running sales already, and I couldn't resist buying a few little treats for myself... after all, I was saving so much money by buying stuff which was on special offer... But, although the mall wasn't as crowded as I had feared, I still didn't have much in the way of inspiration for several of my presents, and I ended up working my way right around the whole of Bluewater, dumping stuff in the car boot, and then going back for round two. (That picture of the shopping centre isn't from today, by the way...)
After four and a half hours' intensive shopping, I decided that I had earned a little rest, and headed towards the Krispy Kreme Donut shop. Having given up chocolate for Advent, the sight of all the chocolate toppings made me go weak at the knees, but I was able to resist, and had a snowman jam doughnut (I confess he had a couple of chocolate flavoured buttons) and an apple and cinnamon doughnut, along with a spiced apple and cinnamon steamer. This drink tasted a bit like an apple-flavoured lemsip, without the gritty tablet taste, and it was surprisingly delicious.
Then, feeling a slight twinge of guilt at the stuff I'd bought for myself, it was time to get back home. I even remembered to stop off to buy some milk, which cheered me up... though I have no doubt that I will discover I've forgotten something. 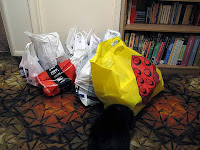 It was quite a relief to get all the bags inside. Sylvester came and had a sniff, and then walked off in a huff when he realised that there were no cat biscuits or toys, and no meat products.
It's now 5pm, and, having had a cup of tea to refresh the flagging spirit, I have a little time in which to change some sheets, wrap the presents, (before I forget who gets what) empty the bin, feed the cat, and then get myself ready for Mass (this takes longer than you might think... when I try to get myself prettied up, it requires more plaster and paintwork than the Sistine Chapel ceiling! At least the hair and nails were done yesterday!) 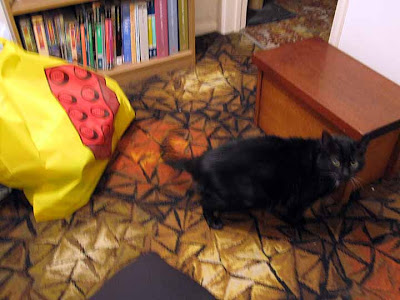 I hope that everyone else's preparations go as smoothly. Merry Christmas to one and all !
Posted by Mulier Fortis on 24.12.09

One can tell you're a good Catholic girl, calling on S. Joseph - Wendy Cope, the poet, is obviously more Evangelically inclined : her poem is 'Jesus found me a parking space' ! (Although, now I think of it, the advice to ask Him for help came from a former Scots Presbyterian, now Anglo-Catholic . . . hhmmm.)

Glad you had a fairly succesful day, though : I just thank God every time I realize that I never need go to Bluewater again.