Britain Soldiers On Valiantly Despite Adverse Weather... (Not!) 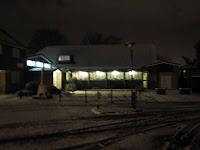 I should be used to it by now, but the British inability to cope with slightly adverse weather conditions never fails to amaze me.
We had warnings of snow last week. After February's fiasco, I expected better preparation. Silly me!
On Wednesday, while I was out on break duty, (Sod's Law in operation) it started to snow. However, the flakes were tiny, and didn't settle. On Thursday afternoon, there were severe weather warnings being issued for the South-East. We were assured that the gritters were out in force, and there was plenty of rock salt to go round. Thursday night, while I was in the Parish club, the snow arrived.
After chucking a couple of snowballs at a passing cleric (well, it was his fault for trying to take a photo of me clearing the car windscreen) I drove home carefully. There was very little evidence of any gritting having been done, but because the snowfall was fresh, it was easy enough to drive slowly through it.
Friday saw a major freeze, and this meant that there was more danger from ice. The main roads were now fairly reasonable... but the side roads were a joke, and none of the pavements appeared to have been treated... so walking anywhere other than the middle of the road was pretty much impossible.
Meanwhile, other parts of the country were hit by snow. Airports were closed, which one can understand, but the Eurostar trains ground to a halt for hours in the Channel Tunnel, which seems bizarre. Apparently it was the wrong type of snow: too fluffy.
The weekend was cold, but there was no more snow in our corner of the world. I had a lazy day today, as I was planning to get to the evening Mass at Blackfen. At about 4:45pm I heard a lot of revving of an engine, and a squealing noise. I stuck my head out of the window, and saw that there had been a fresh snowfall (onto all that slushy ice) and a bus had ground to a halt just at the top of the hill on my road - it is a very steep hill, and winding as well...
I immediately left the house. This was just as well, because I then encountered a traffic tailback which meant that a journey which normally takes 10-15 minutes took two hours. No evidence of any gritting, and soft fluffy snow on top of ice or slush, meant that several cars were fishtailing, and quite a few were unable to go anywhere at all.
I made it to church just in time for Mass - which was sublime. Luckily the journey back only took 45 minutes, as most of the rush hour traffic had gone.
The bus was still stuck on the hill though! 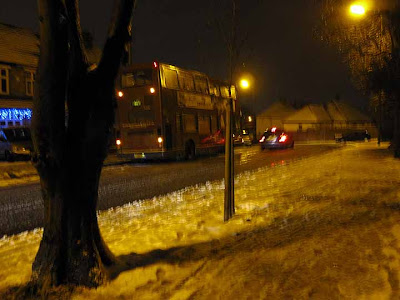 There was snow last winter, too. I cannot quite understand why my neighbours don't have snow tires and snow shovels and snowsuits, since snow really does happen, again and again. This trying to scare it away with a broom stunt--not effective.

I have been wearing my Canadian snowboots for months. Apparently they look odd and it was suggested to me that I get nice, leather, Princess-Di-pretends-she-likes-riding-horses-now boots. But then Edinburgh froze solid and everyone else looked frightened and confused while I strode along in my firmly gripping snowboots. Ahahahahah! Behold the Colonial's Revenge! And as we know from Star Trek, revenge is a dish best served cold.