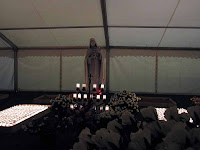 Having announced my return to blogging, I realised that posting today would be tricky: I usually go straight to church (from school) on Thursdays for Benediction. Contrary to popular belief (mostly among schoolchildren) teachers do not get to go home at 3:30pm. I'm usually at school until 5:30pm - 6pm, getting turfed out by the premises staff. Since Benediction starts at 8pm, and I usually help to open the church and prepare things, there isn't much point in my going home.
Sometimes I grab a portion of chips en route, and sit in the car (in the church car park) munching while listening to the radio.
This can be a bit of a mistake. Radio 4 has an anti-Catholic bias which is often bad for my blood pressure.
Having noted the phenomenon of St. Thérèse's relics attracting thousands of the faithful (and the not-so-faithful), the BBC decided that it was impossible to avoid comment, though they really had tried. But, since they had to say something, they made sure it was a disparaging reference to superstitious practices which many ordinary Catholics find quite embarrassing.
The reality, which I was privileged to observe for myself at Aylesford, was quite, quite different. 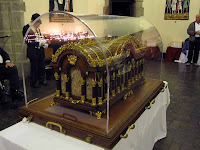 Ordinary people actually want to venerate the relics of the saint. There is a visceral "pull" - a real need to establish a physical connection as well as a spiritual one. That's what I love about the Catholic Church - she has always known that we are body and soul, and we need the physical side of our natures represented in our devotions: so we have medals, pictures, relics, bells, chants, incense, stained glass. It's real. It's touchable... and, as I discovered, once people realised that they were allowed to touch the relics, they couldn't stay away.
I did not go to Aylesford to see a miracle. I didn't expect to experience transports of joy, or any intense feelings. I went to venerate the relics of a saint, someone who has finished her earthly journey and achieved the ultimate goal: she is now in the presence of God and enjoys the Beatific Vision. She is, therefore, someone I want to emulate.
And, judging from the sheer number of people who have gone to see the relics of St. Thérèse around the country, I am not alone in this. Maybe a few people have gone out of idle curiosity. That's not a sin, and it's not to be discouraged, either: didn't Jesus himself say "Come and see" to some of his first disciples? And perhaps a few people have gone in the hope of experiencing a miracle. Miracles do happen, but only if you ask for them! The reason we see so few miracles, I am sure, is that people limit their prayers to what they believe is possible, and don't dare to ask for anything more.
I think this is what I have gained from venerating St. Thérèse's relics: the idea that I need to pray more trustingly, and more insistently, like a child who expects its parents to provide everything it needs and wants, and so just asks.
Two other very moving accounts from friends who venerated the relics at Westminster: Leutgeb has written her report in two parts (First and Second), and Patricius has also written a post.
And I want to include a message for Elizabeth: the relics are, as far as I can ascertain, the saint's femur (thigh bone) and some of the bones from her foot... I don't know what happened to the rest of her leg!
Posted by Mulier Fortis on 15.10.09

Thanks for the referrence Mac. As for myself, I went to Westminster expecting nothing much. I have reverenced Relics before, in Germany and elsewhere, but I guess I was just taken off-guard and got caught up in the whole fervour of it all - it really was quite extraordinary.

Give her autobio a try again.

And concentrate on that business of trusting in God -- because that's exactly the core of her autobio. "Become as a little child."

That doesn't mean "be ignorant" -- but just trust in the Lord.

She "confounds" precisely because she is so "simple."

The Beeb has an anti-Catholic bias? No way.

Excellent commentary on why we papists flock to the sites of relics - no complex theology or philosophy, but rather "because we, as humans, NEED to."

I think that we have to remember that the BBC is tied into the sensibilities of the Reformation and RELICS (YIKES) are really very frightening to these people because of the way the Reformation is taught in schools. Cf the conversation I had with a History Teacher last week.

Phoning up does make a difference to the News, but from my experience only for a short while before they revert to type.

My blog is getting lots of hits from people googling Westminster and St T of L, so maybe people are looking for alternative accounts.

We have a lot to learn from St Therese:

"Jesus, help me to simplify my life by learning what you want me to be - and becoming that person."

“You know well enough that Our Lord does not look so much at the greatness of our actions, nor even at their difficulty, but at the love at which we do them”

The youth liturgy was pretty impressive and was certainly tasteful and solemn, truly befitting the occasion. Events like this have a habit of bringing friends together and in many ways, for myself at least, we realise how much love we do have in our lives.

My friend said there was a lady there who was very upset. She had an empty pushchair. Sadly her child died earlier in the week and she hasn't been able to let go. I hope St. Therese in someway brings that lady the peace she needs.

There is something quite profound about relics. (understatement). This past summer our youth group visited the Mother Cabrini Shrine outside of Denver, Colorado. Saint Francis Xavier Cabrini was the first American saint. We saw the rocks arranged by her in the shape of a heart. Actual second class relics after her canonization. It is a deep spiritual moment to walk in the literal footsteps of a Saint.