Happy Birthday To Me... 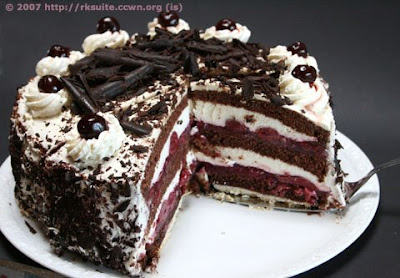 It's my birthday, so I thought I'd indulge myself with a "cookery" chocolate cake post... (alas, a virtual cake, not a real one!)
As a child, I spent many happy hours observing my mother, who was a very good cook. Alas, my attempts to copy her methods rarely succeeded in producing anything edible, and, on one memorable occasion, my Christmas mince pies were declared a danger to public health, likened to something embargoed under the Geneva Arms Convention, and duly transported, by my mother, directly from oven to bin.
To be honest, chocolate cake is rarely as good as it looks: it's generally too dry, and often sinks like lead into the pit of one's stomach. The exception is Schwarzwälder Kirschtorte. It was my favourite for many years, and I would beg my mother to make it as a special birthday treat.
The bottom layer should be chocolate sponge (I've also seen it with a chocolate shortcrust base), soaked in Kirsch (a delicious liqueur) - and, since most English "Black Forest Cherry Gateaux" leave out this most vital part, they're always disappointing, as my family discovered when, one year, my stepfather tried to save my mother the hassle of making the cake by ordering one from Harrods. Not a good move.
On top of the Kirsch-soaked sponge goes a layer of cherry conserve - made by cooking the cherries (which have previously been soaked in Kirsch) - followed by a layer of whipped cream. A layer of sponge is then added (this may or may not have Kirsch added... it depends on how alcoholic you like your cake.)
More Kirsch-cherry conserve is added, followed by more cream. The last layer of Kirsch-soaked sponge goes on. Then the whole cake is slathered in whipped cream, and it's decorated with chocolate shavings (only proper Swiss or Belgian chocolate, the darker the better) and maraschino cherries to pretty it up a bit.
If you're a smoker, you might want to consider allowing a little time to elapse between consuming the cake and lighting up...
Posted by Mulier Fortis on 28.6.09

Many Happy Returns Of The Day, Mulier Fortis. May your Kirsch never curdle. Does Sylvester like Kirsch ? Thank you for the excellent blog.

Happy Birthday, Mac!!! Hope you enjoy drinking...err...eating that wonderful cake, and may you have many more years of sharing your insights with us. Rosemary in Missouri, U.S.A.

Very Happy Birthday. Long may you live to write more with such humour! Enjoy the cake. Though you write "To be honest, chocolate cake is rarely as good as it looks". But for those whose cholesterol levels do not permit cake, een one slice would taste far better than it looks! Enjoy it, and don't worry about the hips!

Many congrats for the day Mac!
Sto Lat, sto lat, niech zyje nam!!!
as we sing in Polish on such auspicious occassions!

We'll catch up to hand over your prezzie soon. God Bless.

Happy Birthday! Hope the cake tastes as good as your description.

Miss Ellen, yes the cake does taste as good as my description... sadly, I didn't get a cake.

My mother thinks I should lose weight, and so doesn't bake me birthday cakes any more, and I can't bake a cake to save my life, so this post was definitely in the line of "memories" rather than actuality.

Happy Birthday! I feel as though I have eaten the cake myself!

Have a wonderful day and may the next year be filled with good health and happy days.
You will be in our family Rosary this evening.

Mac!! Happy Birthday!!! You've got a little ways to go before "coming over to the dark side" so enjoy it! Many happy returns of the day.

Happy Birthday! Have a jolly good day. (even though it's almost over)

...though I've decided to celebrate the Octave!

Once again, thank you all ever so much for your kind messages!

Ooooppps! Color me chagrined. That will teach me to check the dates on posts.