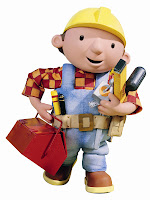 The electrician has finally finished. Apparently, none of the wiring in the flat was earthed. That has now been put right, so I shouldn't get electrocuted by my microwave oven. The fuse box has been replaced, and I have several more double sockets (with on/off switches) where I previously only had single ones, which means I can ditch a few extension leads.
The down-side is that the holes in the plaster need filling and then it needs to be painted over, and the kitchen is a real mess. My landlord said that he'll get it sorted... I just hope that he can do it without any of the major mishaps recounted in the Flanders & Swann song... and preferably when I'm away!
Posted by Mulier Fortis on 24.4.09

Ahh, Flanders and Swann: great family favourites. Worth looking on Youtube for some of their other songs, particularly the ones performed by them rather than cover versions...

Congratulations, I'm sure the worst is behind you :)