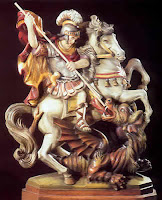 I have to confess to getting a little tired of hearing people assure me that St. George didn't actually exist. These are, of course, the same people who assure me that St. Peter wasn't actually buried under St. Peter's Basilica in Rome*...
Yes, there are no such things as dragons. Yes, the pictures usually show St. George slaying a dragon and/or rescuing a damsel in distress. No, that doesn't mean St. George doesn't exist. I guess "allegory" isn't in the National Curriculum...
Here's what it says in my St. Andrew's Missal:

St. George, born of an illustrious family in Cappadocia, was promoted by Diocletian to the first ranks in the army. When the Emperor had published at Nicomedia his first edict against the Christians, St. George reproached him for his cruelty. Immediately cast into prison, he was subjected to such atrocious torments that the Eastern Church calls him the Great Martyr. He was beheaded in 303...
This patron of armies is venerated by Greeks and Latins... England chose him for her patron in the XIIIth century.

We have Mass in his honour in the usus antiquior later this evening, followed by burgers, hot dogs and other refreshments...
* Yes, St. Peter was buried under the Basilica. Tours of the Vatican Necropolis (the Scavi) can be arranged through the Ufficio Scavi, but if you're not likely to be going to Rome any time soon, you can read about the Necropolis and also follow links to two complete books (by John E. Walsh and by Margherita Guarducci) about the discovery of St. Peter's bones.
Posted by Mulier Fortis on 23.4.09

Steady on, some people will think you're letting your right-wing Catholic blogger proclivities show ;-)

Not to mention the polemical and vituperative side of me...

...or maybe this is just a 'day in the life of', with pics of cats who cannot spell or use correct English grammar...

The dragon been slain by George is the devil and he definitely exists.

I don't know about allegory but the devil is definitely not in the national curriculum.

And these same people want to make St. Georges day a national booze up day, what a pathetically shallow society we have become.

The following is from Catholic Online www.catholic.org - a brilliant summary and excellent website.


St. George
Pictures of St. George usually show him killing a dragon to rescue a beautiful lady. The dragon stands for wickedness. The lady stands for God's holy truth. St. George was a brave martyr who was victorious over the devil.

He was a soldier in the army of the Roman Emperor Diocletian, and he was one of the Emperor's favorite soldiers. Now Diocletian was a pagan and a bitter enemy to the Christians. He put to death every Christian he could find. George was a brave Christian, a real soldier of Christ. Without fear, he went to the Emperor and sternly scolded him for being so cruel. Then he gave up his position in the Roman army. For this he was tortured in many terrible ways and finally beheaded.

So boldly daring and so cheerful was St. George in declaring his Faith and in dying for it that Christians felt courage when they heard about it. Many songs and poems were written about this martyr. Soldiers, especially, have always been devoted to him.

We all have some "dragon" we have to conquer. It might be pride, or anger, or laziness, or greediness, or something else. Let us make sure we fight against these "dragons", with God's help. Then we can call ourselves real soldiers of Christ. .

Ouch! Listen, you're the one who turned down my SSPX story last year because your blog didn't do that kind of thing!


Volpius Leonius, are you sure a national booze up day is such a bad thing? Maybe the weather is getting to me ...;-)

Oops, that sould have been 'indulgentiam ...'!

I prefer to actually be celebrating something not just drinking for the sake of drinking Ches that's all, maybe I'm old fashioned that way but its a lot more enjoyable in my experience

And there less temptation to drink yourself into a state of mortal sin that way to.

Ahem! Seeing that's it's my patron saint's feast day, I'd like to add something!

Martyrs of that time, men or women, were depicted as slaying the dragon of the apocalypse, which is Caesar's Rome possessed by Satan. The damsel, only in later representations, is also from the Apocalypse, the Woman being Holy Mother Church (and Mary).

The white horse is always used since, of course, this is a very paricular symbol in the Apocalypse.

The slaying takes place at the death of the martyr. Get it?!? Martyrs are victorious in their deaths for Christ, for the Church.

We think we're smart these days, and think everyone in the past were stupid. We are living in such dark times, congratulating ourselves for being the violent people ever to have walked the face of the earth, possessed by Satan in our diabolical violence.

Saint George, pray for us!

Father George bloggingLOURDES (for a little while longer!)

"St George was a Roman Commander! He definitely existed! Anyone care to argue"?

I'll be happy to put anyone straight regarding the facts of the matter - RIGHT!!!! ;-)