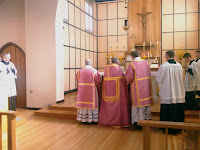 A happy Laetare Sunday to you all!
Rather later than anticipated, (I had a few errands to run) but better late than never, I have some photos from this morning's Mass at Blackfen.
Fr. Tim gave me his snazzy camera, with instructions to get some good "long shots" from the back of the church. I'm unable to kneel, and I'm not exactly light on my feet, nor am I in any way inconspicuous, so I delegated the task of Official Photographer to Carl. I stayed put in my usual pew, and snapped away quietly from the front... the best vantage point of all, according to Carl, who confessed to contemplating whether it was worth him trying to oust me from the front for a few of the photos. He obviously decided that it was more than his life was worth, and contented himself with judicious use of the zoom lens.
Fr. Tim hasn't uploaded his photos yet, so I'm getting in there first with my dinky phone camera. 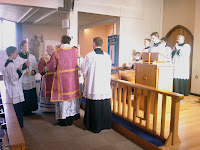 Dr. Laurence Hemming made a special trip to Blackfen, and John Harrison, permanent deacon at St. Mary's Chislehurst, allowed himself to be snaffled by Fr. Tim (with the consent of his PP) so that we were able to have a full Solemn High Mass, and the new rose vestments were displayed in all their glory. We also had a good number of servers, which meant that we were able to field six torch bearers for the Canon of the Mass.
Mass is, naturally, always an awesome event, simply by virtue of the fact that God becomes present... but the ceremonies of a Solemn High Mass just add that something extra special. 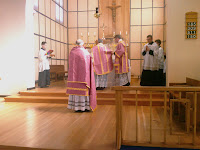 Jonathan, our MC, remarked afterwards that it was the largest humeral veil he had ever seen... our sub-deacon was nearly lost beneath it.
I really love the fact that the clouds of incense seem to fill the sanctuary during the Consecration. My little phone camera can't always quite catch it... but this time I was lucky. 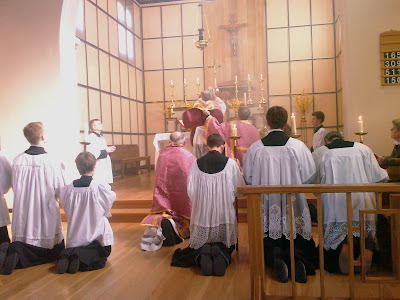 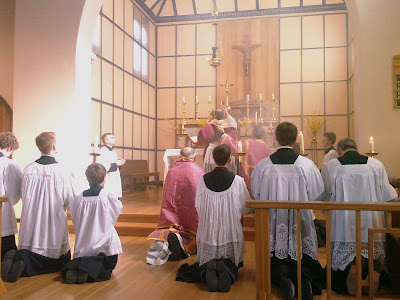 Keep an eye out for the "proper," high resolution photos which will be making an appearance over at Fr. Tim's blog.
UPDATE: As expected, His Hermeneuticalness has indeed put up a post about the Mass with some stunning photos... you can see them HERE.
Posted by Mulier Fortis on 22.3.09