They do say that you learn something new every day. This is particularly true for anyone who teaches (or attempts to teach) teenagers...
I'm teaching A level Biology. Now, I've always concentrated on the mammalian side of things, with the odd foray into biochemistry and histology. However, I'm currently sharing a class with my Head of Department, and the way that the new scheme of work is arranged has meant that I have had to change my focus.
Instead of lungs and alveoli, I'm having to get to grips with fish gills. Literally.
I've seen pictures and diagrams of fish dissections. Yuck. I was reassured that I wouldn't need to bother with gutting anything. I would just have to deal with the head.

Mackerel are, or so I've been told, the fish of choice, being a decent size for a dissection. However, there was apparently a problem with the supply of mackerel. I have no idea what the glitch was. Instead, I was informed that one of the teachers could get salmon, if that was ok.
My only experiences of salmon had been of the smoked and thinly sliced on brown bread variety. Somehow, I doubted that was what the teacher concerned had in mind... so, this morning, I approached the equipment trolley with some trepidation. 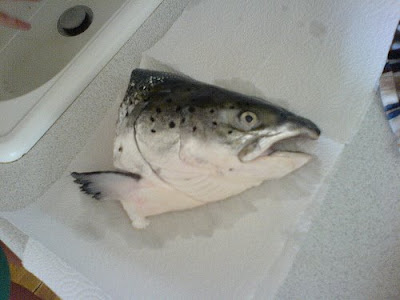 I can now confirm that salmon are very suitable for gill dissections. There is just one little point to note...
They have teeth. Sharp teeth. Lots and lots of sharp teeth... very sharp.
...there is also an interesting little reflex which occurs if you press a certain point under the jaw.
Putting your finger inside a salmon's mouth in order to demonstrate the path of water in through the mouth and out via the gills is not a good idea.
Trust me on this one.
Posted by Mulier Fortis on 11.2.09

Now I know why Physics is the best subject in the world ....

In my biology and zoology school days Mac the Dogfish was King for dissection purposes! We had a Dogfish each (no less) and had to uncover all the cranial (my favourites were the trigeminal nerves) in the head area without cutting them - obviously good training for future surgeons!.

We gleefully chipped away at skin and cartilage for weeks searching for those damned nerves and after every 'practical' session the Doggies were sloshed back into a huge bowl of Formalin - frowned on now you know, carcinogenic, skin irritant blah blah!!!

So a few 'paper cuts' from sharp teeth in the jaws of body-less Salmon head - pah! You Guys are 'Lightweights' in comparison to the good 'ole days! Ha ha ha ha!!!

Well the above comment is almost exactly what I was going to say. However I can add that i bought a dogfish from school and did dissections in my bedroom!!! My mum has all my zooology and botany practical books at her place, and they are one set of books I'll never part with. Liz ( organist's wife)