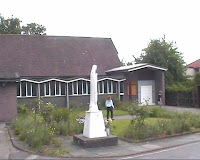 I didn't get a chance to post on this earlier, as I was visiting my mother, and computer access was seriously limited... blogging from a mobile phone is ok for short posts, but not really suitable for anything more involved, especially when one's parents seem to live in a dodgy reception area.
Fr. Tim has been extremely charitable in his comments on the whole situation. He has done his utmost to listen to the opinions of the small group of parishioners who are vehemently opposed to the Extraordinary Form of Mass being provided in Blackfen, and has answered all their criticisms, questions and complaints in an excellent paper, Sacred and Great. He held two meetings in the parish to explain why he had introduced the Extraordinary Form after the Holy Father published Summorum Pontificum, and also to elaborate on how "active participation" (the expression so beloved by tabletistas who object to the EF) was to be understood, especially at the EF Mass, but also in the Ordinary Form - it doesn't mean everyone has to have something to "do."
One of the criticisms levelled at Fr. Tim was the lack of consultation over liturgical changes, and comments such as "Latin's fine, but does it have to be every week?" were aired. So, after explaining that the liturgy of the Church was not a matter for compromise ("consultation" implies that some mutual agreement can be reached) Fr. Tim started up a Google Group, to enable parishioners to discuss any concerns, ideas and suggestions about other aspects of parish life. Strangely, the disaffected group were unhappy with this proposal.
So, they went to speak to the Area Bishop. They also contacted the Archbishop. What they hoped to achieve by doing this is a mystery; the Bishop can hardly insist that a perfectly valid Mass should not be celebrated in a Catholic church, and I am sure that they did not want to demand Fr. Tim's removal as Parish Priest...
When it became apparent that the Extraordinary Form of Mass was not only continuing to be celebrated at Blackfen, but was becoming more popular as people overcame their initial misgivings about "not knowing any Latin," the group went to the press. To add insult to injury, they went to The Tablet, which, since 1968, has frequently dissented from some of the key teachings of the Church.
Obviously, although Elena Curti (the Deputy Editor of The Tablet) has visited the parish and sought the opinions of various people, she has not yet published her article. However, from the tone of her email (I received one asking for my opinion of the split which had developed) I can guess the sort of piece she was planning: I suspect Damian Thompson was spot on in his expectation of a "hatchet job." Fr. Zuhlsdorf has also had his say, warning Tabletistas everywhere of the possible backlash which might occur should such a piece actually be published.
Any talk of a "split" in the parish is absolute tosh. There is a small (but very vocal) group of parishioners which is extremely unhappy with the provision of the Extraordinary Form of Mass. There is another group which is extremely delighted by the provision of the Extraordinary Form of Mass. The vast majority of parishioners are, however, totally baffled by the whole thing. As far as they are concerned, it's just a different style of Mass, and if you don't like Latin, then you can go to another one, so what is all the fuss about?
The variety of worship-styles at Blackfen is pretty unique, from what I can gather by reading various comments. Just to emphasise, there is a Mass on Saturday evening, which is in English, Ordinary Form, versus populum, with hymns. There is the 9am Sunday Mass which is said in English, Ordinary Form, versus populum, with hymns, a children's choir, and a children's liturgy group. The 10:30am Mass is in the Extraordinary Form, a Missa Cantata. Finally, the Sunday evening Mass is said in English, Ordinary Form, but ad orientem and no hymns.
One criticism levelled at Fr. Tim was that celebrating Mass in the Extraordinary Form was divisive... this being aired in The Tablet is not going to help in the task of building peace and harmony in the parish.
Posted by Mulier Fortis on 17.2.09

It is the same in most parishes, or for that matter, in the world. The people that don't have a leg to stand on (those we usually call "liberals"), have to resort to ad hominem attacks or just volume. Sort of a "shout the opposition down" type of thing.

You tell Father Tim to hang in there - he's doing the right thing!

Perhaps dear Elena will lose it completely and treat us to a Private Eye style Taxi Driver rant ....

(Every week, a well known frustrated liberal taxi-driver writes on an issue of topical importance in the life of the Pilgrim People of God. This week, Elena Curti (Cab No VAT 2) describes the liturgy in the parish of Our Lady of the Rosary, Blackfen)

Blimey Guv, wot about that Tim Finigan? He's two onion bhajis short of a set meal and no mistake! I mean, Latin Mass, who's he kiddin? If he don't like English he should *** off to ******* Europe. Oi mate, who d'you think you are, Paul Inwood? Tel you wot I'd do wiv blokes like im, string 'em up in the vernacular! Its the only language they understand.

What I fine extraordinary is how illiberal so-called 'modernists' are - they simply can't bear anyone who doesn't believe in everything they do. Whilst in my parish, we only have Mass in the ordinary form, the Masses all have a different character - there is the family/children's Mass, one without hymns, one with hymns but no choir, etc, and you simply go to the one which suits your preferences. Whilst I don't particularly like the family Mass, as it is too noisy and has (to my mind) naff music, I don't campaign for it to be abolished...

The parishioners in Blackfen should be grateful for their pastor, not attempt to bring him down. I might have to come along myself (I live less than 20 miles away) to show support...

Yuo've probably thought of, or done this, but what about the contented parishioners writing letters in support of Fr. Finigan to the area Bishop and the Archbishop?
How sad that some parishioners just don't appreciate how fortunate they are in having a choice as to which form to attend.
Where I am there is no opportunity to attend Mass in the Extraordinary form, and I can't see that changing...

H'mmm... I can't see a problem: EXCEPT, I don't particularly like "children's choir Masses" but DO like a sung Mass, but IN ENGLISH, and there would be no way to attend a Sunday English Mass WITHOUT having to listen to children sing and still having congregational singing.... switch Sat. night and Sunday 1st Mass around.

I hope all goes well. So much of this stems from how people were lied to about what Vatican II actually did. They think the present restoration is somehow offensive to the present reality that has come to pass for Vatican II. I think so many are suffering from Benedict's gentle hand because they've been lied to for so long. Let's pray that speaking the truth in love will bring about that freedom that only truth can give!

Mac writes 'this being aired in The Tablet is not going to help in the task of building peace and harmony in the parish'.

The point is that the Tablet can air whatever it likes including its laundry, 'cos no-one reads the flippin' thing anyway! It's dying the death of journalistic attrition and that it has to pick on such a subject as a disgruntled parishioner or two over the EF in a suburban Parish proves it! It's not even for sale in Our Lady of the Rosary Church because demand for its enlightening pages is just sooooo great! So no-one will read it in Blackfen. Perhaps they'll hire several 'Big Issue' street sellers around Blackfen and get them to hand out copies of the Pill.

Methinks the Tablet have awarded themselves far to much 'gravitas'. The rag is irrelevant (and irreverant!) and peace and harmony in the Parish or indeed in the wider Catholic World will not be affected by one iota by what they publish.

I think there's only one thing to say to the people who don't like it:\

"Is anyone making you go?"