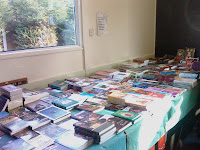 I mentioned that I'd visited the bookstall during the Day With Mary yesterday. There were even more books than last year, and I spotted several titles I hadn't noticed before. One of the team told me that they do indeed bring a different selection each time.
The people on the bookstall remembered me from last year, and one of them was only too happy to take the time to make suggestions for this year's purchases...

First, I bought two books by Joan Carroll Cruz, Secular Saints and Miraculous Images of Our Lord. I'd really enjoyed other books of hers: Miraculous Images of Our Lady, which gives details of 100 famous portraits and statues which have been accompanied by miracles and supernatural phenomena; The Incorruptibles, a book about saints whose bodies were found to be incorrupt, and Eucharistic Miracles (I have definitely read it, but I can't find it, which leads me to suspect that I have lent it to someone... though there is always the possibility that I borrowed it from someone else and have since returned it... in which case I need to get my own copy!)

Next on my list of discoveries was The Divine Life of the Most Holy Virgin by the Venerable Mary of Agreda. The book is a section of another book, The Mystical City of God. I'd heard the name of Mary of Agreda, but am a bit hazy as to when, where and why. A quick glance at the book revealed that Mary of Agreda had visions about the life of Our Lady; I have come across references to Mary's early life in the writings of many of the saints, and these episodes must have been part of the Church's unwritten tradition (similar to the tradition that Veronica wiped the face of Jesus on his way to Calvary), and so I'm hoping to find out more.

I bought a new copy of St. Francis de Sales' Introduction to the Devout Life. The copy I have is getting a bit battered, and anyway, it's abridged, so I'd been meaning to get hold of a proper version... the TAN edition is complete and unabridged.

I also got The Priest is Not His Own by Archbishop Fulton Sheen. I think that it might give me an insight into the sacrificial nature of the priesthood which might help me to explain to other people exactly why women cannot ever be priests, and why this is not a matter for "equal opportunities" legislation... the argument against ditching the clerical celibacy will also be covered, I think. I have no problem with either of those concepts myself, but explaining it to other people can be a bit tricky...

The Age of Martyrs sort of jumped out at me. Written by Abbot Giuseppe Ricciotti, it covers the period from the Emperor Diocletian up until the Emperor Constantine. I know very little about the early martyrs, so look forward to finding out more.

My SD has told me to spend time in contemplating the Four Last Things (cheerful sort, my SD) and so, when I had my attention drawn to a little book by Fr. Martin von Cochem, O.S.F.C., with that very title, I realised that this book was a definite "must-have". It is pocket-sized, so very convenient for carrying around.

I was going to end it there, but my helpful guide then showed me one last book: Divine Intimacy: Meditations on the Interior Life for Every Day of the Liturgical Year by Fr. Gabriel of St. Mary Magdalen, O.C.D. My initial thought was that I've only just started using the Monastic Diurnal and the pre-1962 calendar, and having meditations following the Novus Ordo liturgical year would just be too confusing. Out of curiosity, I opened the book for a quick examination; I then spotted the phrase "Septuagesima" and realised that this was actually following the old calendar... and then I just couldn't resist it. 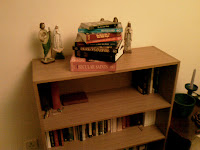 As you can see from the photo, I have a bit of space on the bookshelf... and the newly purchased books will fit very nicely. This is the first time I've bought books and have been able to put them straight onto shelves. It's slightly disconcerting: as if they might get swallowed up and lost forever in amongst all the other books.
I might need a few more visits to various websites in order to eliminate all the spaces...
Posted by Mulier Fortis on 15.2.09

Wow you scored! Lots of interesting books. I saw Divine Intimacy at the Baronius Press site a couple months ago and was considering getting it.

Have you been here:
abebooks.co.uk

but try not to fill the shelves all at once!

Wish i could have been there. My favourite hobby is scouring second hand shops and charity shops for Catholic literature. Today i scored big with a copy of The Intimate Merton for £1.50 and Mere Christianity for 90p.

Believe me when i say, my life really is so sad that i am positively beaming with joy at my finds.

'The Priest is Not His Own' is, I would say, one of the best books ever written. It's like Marmion, or Manning, but all its own too.

It's one of the books I don't even try to get from the bookcase into the 'books for sale' pile - and there's plenty dear ones I've liked that I have sold.

Fulton Sheen's autobiography is wonderful too.

Well, if it's bargains you want to talk of, there's the 18-something Catholic Martyrs of England I once found that Mac covets and will be the custodiatrix of, should I go to A Certain Place.

Then there's the 111 year old German Catholic prayer book I picked up for £6... oh, the joys of living in a Presbyterian country where they don't always recognise Catholic books! :)