A Distinct Lack Of Christmas Cheer... 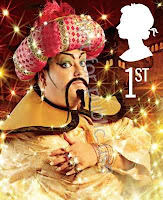 I am not a happy bunny.
I had heard that, in a break with tradition, Royal Mail had decided to produce both religiously-themed and secular stamps for Christmas this year, rather than just producing one lot and alternating each year between religious and secular themes. They made quite a big thing of how good they were being in listening to customers...
So, when I bought my Christmas stamps, I particularly requested the religious ones. Unfortunately, they were "sold out." I commented on the popularity of the religious stamps, and asked for ordinary, non-Christmas stamps, as I really didn't want to plaster the Genie of the Lamp all over my cards.
They were also "sold out."
Since when does a Post Office run out of stamps??
I decided to opt instead for second class Christmas stamps, after checking that I had plenty of time before the last posting date. They only had the pantomime ones. Getting ever so slightly frustrated, I asked for books of the ordinary second class stamps.
They were, you guessed it... sold out.
It was finally acknowledged that they did have sheets of ordinary second class stamps, but they weren't the self-adhesive type.
Just as well that I quite like the taste of stamp glue. Better get licking.
Grrrrrrrrr.
Posted by Mulier Fortis on 12.12.08

Is there more than one place in the UK where you can buy stamps? ;-D

Those genie stamps are pretty gross

I bought my stamps in St Pauls Bookshop by the cathedral in Victoria. They have lots and not a genie in sight.

Unfortunately, I didn't have the time to go stamp "hunting"... which was why I went to the Post Office in the first place!

I had the same predicament. I realised there would be a choice of stamps so went to my local sub-post office (there are a few in existence) which is a round trip of 20 mins away, plus queueing time.

However, I was told that the religious stamps were "sold out". I opted for the plain stamps. Then I had to get stamps for Europe - having made sure these did not depict Marie Stopes I felt quite a killjoy.