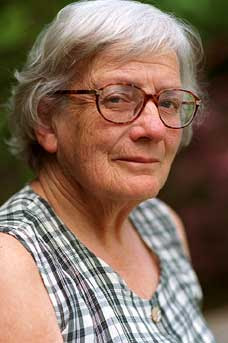 Driving back home after a very tiring week, I switched on the radio.  Bad move.  I got to hear Baroness Warnock declaring that people suffering from dementia should, if they do not wish to be a burden on their families, be allowed to commit suicide.
The Baroness then followed this up by stating that, not only should they be allowed to make this choice, but that in fact they had a duty not to be a burden, financially or emotionally, on their loved ones... and also they should not be allowed to be a drain on the resources of the NHS.
And then, of course, it was made clear that, according to the good Baroness, people with dementia are not able to make that decision for themselves by the time they become "burdensome" and so there should be research to determine at exactly what time sufferers from dementia are to be considered as no longer responsible for making their own decisions...
She was vehement in protesting that she only wanted this to apply to dementia patients.  But, to be frank, if one were to take the arguments of the Baroness seriously, and follow them to their logical conclusion, then it would not be possible to stop at dementia sufferers, as anyone with a debilitating disease which was a drain on limited NHS resources, or anyone who was considered to be a "burden" by their nearest and dearest should be considered fair game.  And if they were no longer compos mentis, then someone would just have to take the decision for them...
Listening to the Baroness talking was a terrifying experience, as she seemed to have no idea that what she proposed was already demonstrating a slippery slope, from a person not wanting to be a burden, to a person who should not allow themselves to be a burden, and then to a person who, by virtue of being unable to speak for themselves, would be considered a burden and disposed of accordingly... to save the financial resources of the state.
A burden.
Whatever happened to "Honour your father and your mother, that you may live long in the land that the Lord your God gives to you..."?
Posted by Mulier Fortis on 19.9.08

Right on, Mac; right on!

Oh what stupid idiots do we allow to run this country?

A person with dementia doesn't cease to be a human being, with thoughts, passions, and feelings. With rights, duties, and respect...

Besides, how could someone with dementia properly take the decision? It's so damn stupid, and incorrigible... let's legislate MURDER.

P.S. Drink a pint for me on Tuesday. And hiss at Fr Z for his sense of timing - I shall be in fair Westallgäu!!

I still vividly remember our ex PP, (now in Rome), when euthansia was being pushed yet again a few years ago advising us all in a sermon "Don't think 'this doesn't affect me' it's all of you, and me, who they will be trying to bump off in a few years, so this needs to be fought, by all of us."

Perhaps the Baroness is already suffering from dementia?

What a horrifying news story...

Warnock is a living illustration of the concept "slippery slope" in just about everything she's ever said on abortion, embryology and euthanasia, from the 1980s to this afternoon. It was chilling enough to read her 2004 "Introduction to Ethics" (not quite the right title, but I forget just what is).

As soon as I saw her photo I knew she'd say that kind of crap. She has the classic Liberal Feminist "I look like a man" thing going on. This lady is SCARY! And scarier still... folk will listen to her and agree with her and be inspired by her!!!

just think about it no more infirm, sick, or elderly (non)people. isnt modern society perfect, just like the people we allow to live in it.

Baroness Warnock is truly one of the most loathsome odious vermin that nature ever suffered to crawl upon the face of the earth. (Swift really knew how to tell it.)

By coincidence, as I read your post I was listening to Billie Holiday singing the "suicide song" Gloomy Sunday.

This stuff makes me really mad in a personal way.

We are so spoiled. No one wants to be "bothered".

I have never thought Mary Warnock to be a deep thinker. And her claim to be an Ethicist... Surely an Oxymoron?

This is the lady who, overnight managed to make the concept of "Special Need" in education a totally meaningless title.

I hope she is first in the Queue to do her "Duty". She seems to be a burden to me.

Yes I'd say she has a definite duty to die now! They always think it's about someone else. Strange that!

What a creepy (I hesitate the use the word...) woman.

What an utterly disgusting proposition from Baroness Warnock.