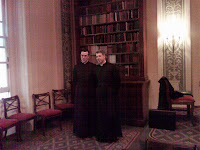 Cardinal Darío Castrillón Hoyos, President of the Pontifical Commission Ecclesia Dei, today welcomed the launch of a new scholarly journal, Usus Antiquior in a message to the editors.
Noting ‘launching of the journal Usus Antiquior which is intended for the promotion of the study of the classical Roman rite from historical, philosophical, theological and pastoral perspectives’ he concludes his desire for success of the Journal, and its concern for all forms of the Roman Rite in current use because ‘as our Holy Father has indicated, the two forms of the Roman rite “can be mutually enriching”.’
Opening the launch, Dr. Susan Parsons, of the Society of St. Catherine of Siena, said, ‘It is of course on this Feast, the Exaltation of the Holy Cross, that Benedict XVI’s Summorum Pontificum was promulgated one year ago. No day could be more appropriate than this to set out upon this venture’. Announced ten weeks ago and launched only today, the Journal has already more than 350 potential subscribers including UK seminaries.
The editors of Usus Antiquior are Laurence Paul Hemming and Alcuin Reid. Hemming, an academic philosopher, is recently the author of ‘Worship as a Revelation’ (London, Continuum) as well as a brief study of Benedict XVI: Reid, a contributor to The Tablet and The Catholic Herald, published the seminal ‘The Organic Development of the Liturgy’ in 2005 and is presently working on a successor volume discussing the liturgical reform beginning with Vatican II.

The Editors can be contacted by email.  The journal's website has details of how to donate money for the start-up of the journal, and how to become a subscriber.  The Society of St. Catherine of Sienna, which is responsible for founding the journal, also has a website. And don't forget, as well as financial support, this great new initiative needs our prayers.
Posted by Mulier Fortis on 14.9.08