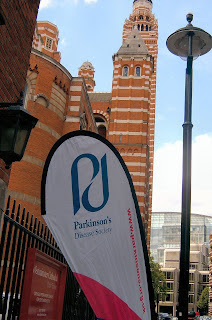 THAT is what should be tattooed on the foreheads of those in charge at Westminster Cathedral.

Now, it seems, the authorities have given the go-ahead for a charity that supports destructive research on human embryos and the creation of human-animal hybrids to hold an event in the Cathedral's hall. It was held last Friday, 4th July.

The Parkinson’s Disease Society’s website states: "We have been lobbying Parliamentarians to ensure they support human/animal research in any votes on this issue in the Human Fertilisation and Embryology Bill."

Mantilla-twitch to Richard Marsden of Bashing Secularism.
Posted by Mulier Fortis on 7.7.08

Geez, what goes with "the powers that be" over there? Are they trying to "exorcise" what they considered to be "inappropriate liturgy" as you had last month with the Latin High Mass with the Cardinal?

Can Fr. Tim be persuaded to do an exorcism? I have visions of him going to all four corners of the building sprinkling Holy Water.

He should start with the rectory!

You should worry - we had that infernal nonsense 'Leonardo Da Vinci's Code' filmed here!

Off topic: Please call by my blog, where you will find you have been severely reprimanded!!

All I want to know is who is the real ring leader. If you know what I mean...

Can Bass 1 - well OK so you had davinci's code but I think we played host to the 'golden compost' as well as allah's 99 names - who would ever think this was a Catholic Cathedral? Shameful!

News over on 'Solomon, I have surpassed thee', is that Monsignor Mark Langham is leaving Westminster Cathedral to take up a new post - unknown as yet.

Actually George, he went a while ago... at least, there was someone new already in charge at the time of Cardinal Hoyos' visit...

Oh I am behind the times - guess we won't see Tony Blair or the BBC back to address the Faithful in the near future then???