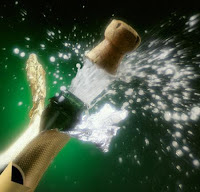 It is hard to believe that it's already a whole year after the feverish expectation of the release of the Holy Father's Motu Proprio, Summorum Pontificum.

From my side of the pew, it has been interesting to observe the increase in enthusiasm for the TLM, and to note that more and more parishes seem to be making provision for it.

I am not "against" the Novus Ordo Mass, and have seen it celebrated with great reverence, dignity and devotion. But I have also seen it celebrated badly, with scant regard for its sacrificial nature, and little recognition that liturgy is something given by God for our benefit, and not something which we do for God, and which can be changed to fit in with what suits us.

Fr. Z has the first part of an interview he gave to Zenit posted HERE. Fr. Tim has given the first of two talks in the parish on the traditional liturgy, and I will post a link to the texts as soon as he gets around to publishing them (which he has promised to do... eventually!)

In the meantime, I thought I would sneak in a re-post of Fr. Tim's celebration video, released on the morning of the publication of Summorum Pontificum.

Can anyone attend Father Tim's talks?

These ones, yes. They're just open talks for anyone in the parish - though no-one will be checking names and addresses...!