Sir Dan Of The Nesbitry

This morning I was attending the funeral of the mother of a friend of mine. Actually Christine was also a friend, though not someone I knew well. She was, however, very special, and very kind to me, and I was glad to be able to pay my last respects.

Because she was such a lovely person, there were plenty of people at the funeral, and eight priests concelebrated. As one mourner put it, "I thought one had to be a bishop to get eight priests!"

Among the mourners was Sir Dan of the Nesbitry. He had taught Christine's sons at the John Fisher School in Purley (along with three of the priests, I believe.) I offered Sir Dan a lift home - I believe his trusty steed was on holiday, and while a green Hyundai is a poor substitute for a white charger, it knocks the spots off Shanks's Pony!

Sir Dan is keen on the blogosphere. Somehow or other, despite not having his own computer, he manages to stay abreast of all the latest information, frequently dropping snippets of information into the conversation which sends Fr. Tim, Joanna and me (and probably a few more besides) scurrying to the nearest computer to put up a post or two. His information is always "Spot on, actually."

Anyway, Sir Dan has acquired a snazzy laptop: so, after tea, scones and coffee cake with him and his wife Aine, I was allowed to inspect it. Very nice. Now all Sir Dan needs is the wireless connection to be activated. And then, I'm sure, he'll just have to start up his own blog... Tabletistas beware! Here you can see Dan with his wife Aine and the new computer... 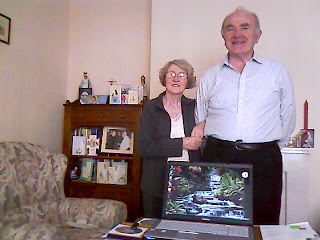 BTW, the photo on the bookcase in the background is Sir Dan shaking hands with the Holy Father...
Posted by Mulier Fortis on 9.4.08