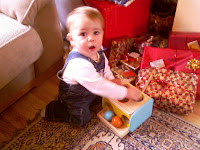 I went down to see my sister on Friday. It was lovely to catch up. We met a friend of hers (with her baby) for coffee in a local coffee shop, and it was interesting to observe other people's reactions to the appearance of children: one young woman seemed to get rather huffy because there was noise, and made a big thing of rustling her papers and finishing off her coffee before stalking out. It's true, she really did "stalk" - there was irritation oozing from every pore.

And yet my nephew was in his pram, and wasn't making much noise... and the other toddler was toddling harmlessly around (followed by his mother, he wasn't just being allowed to run around) and pointing at various objects while his mother said what they were. They weren't being disruptive, and certainly weren't screaming the place down.

I suppose that, a few years ago, my reactions would have been very similar to those of the huffy woman. But, having taken private vows and getting so involved in parish events, I am fortunate enough to have had a fair bit of contact with young families (and large families too) and so I think I may have become a bit more tolerant... just a bit! 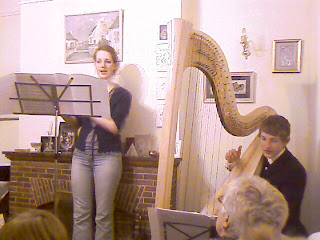 I was privileged to be invited to a joint birthday party this evening as well... several families getting together to have fun. The children got together to put on a magic show, and there were charades, and birthday cake, and champagne... and two of the youngsters provided the music while the adults practised their ballroom dancing skills.

Most of my photos didn't come out, as people were moving too quickly, and there didn't seem to be much point in putting up a load of blurred photos. Unfortunately, one of the photos which did come out had a friend moving her hand in such a way that she looked as if she was picking her nose. For the sake of friendship, I think I shall have to leave that one unpublished!
Posted by Mulier Fortis on 13.4.08

Your eyes and your nose. Very sweet!

I have absolutely no patience with people who get irritated by young children. Whenever I am out with my 6 month-old and two-year-old and get treated to the rolling eyes/withering look/young-mothers-these-days treatment, I am always reminded of that line in Roald Dahl's Matilda 'they're all mistakes, children, so glad I never was one.' Every huffy woman with a coffee was a crying baby once.

Fiorella - my wife and I know how you feel, we have six children and have experienced every and all comment and snide remark about 'haven't you got a TV, never heard of condoms etc... yada... yada. I remember once an elderly gentleman came over to my wife in a supermarket just to tell her that 'she shouldn't have any more children'! Had I been there I might have shoved his shopping basket where the 'sun don't shine'!

She only had three of our kids with her at the time and didn't have the heart to tell him about the other three!!!! LOL! You develop a thick skin and a great sense of humour.

These people are simply very sad cases, no doubt having had very little love in their own lives. In my experience the bigger the family the better and happier! God Bless.