I should be in bed (or at least heading that way) but I'm still on a real high after the Easter Vigil - and so I'm breaking my blog-fast by putting up a post on the Triduum services (and drinking a rather wonderful cup of Green & Black's hot chocolate, as well as polishing off the remains of my Green & Black's Easter egg!) 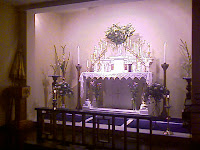 Maundy Thursday's Mass of the Last Supper was very moving: I find myself holding my breath when Judas is mentioned in the Gospel, almost as if I hope that this year he won't "go through with it" and the procession with the Blessed Sacrament to the altar of repose (shown in the photo... isn't it beautiful?) brings a lump to my throat. I am often really tired by this time on Maundy Thursday, and watching at the altar until midnight requires a real effort (funny how I don't normally have any problem staying up until midnight usually!) This year was made a bit more difficult because the wet weather is playing havoc with my poor old bones... and no, I have no idea why wet weather makes broken bones ache! 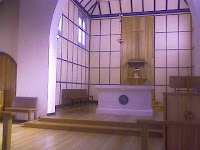 Good Friday dawned bright and sunny... but the wind was bitterly cold. I had considered going to the children's Stations of the Cross - they bring home-made crosses and get to read the meditations and hold up pictures, and their enthusiasm is heart-warming - but I was still very stiff and achy (which made me suspect that the sunshine would be short-lived) and so I went to the solemn celebration of Stations (which also has the advantage of being considerably shorter!)

Looking at the sanctuary, stripped bare of everything, was another poignant experience... 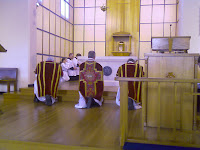 The Good Friday Liturgy was also very emotional: the reading of the Passion provided another opportunity for me to wonder what would have happened if the crowd hadn't shouted for Barabbas... or if Pilate had been braver...

...or if I had been less of a sinner! I have far less excuse than Pilate, or Judas, or the crowd: I know that Jesus is my Lord and God, and yet I still continue to betray him through my sins.

Have a closer look at the vestments Fr. Tim and the deacons are wearing: they are eighteenth century - and the lamb on the back of the chasuble is a real work of art. 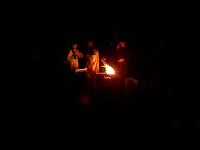 I love the Easter Vigil. I discovered it "by accident" when I came back to the church (I was roped into the RCIA programme when I revealed how little catechesis I had received.)

The rain had stopped by Saturday evening, and the wind had died down considerably, though Fr. Tim looked as if he might go up in smoke more than once as the Easter fire sent sparks swirling through the air. The paschal candle actually went out at one point, and there was considerable difficulty in getting it relit. 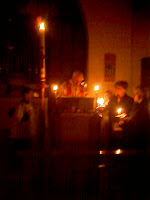 Having the Exsultet and the Old Testament readings by candlelight is awesome... Fr. Tim had produced a "book" with the readings in (last year the first reader went up and read the first of the OT readings - from Genesis - instead of the third reading - from Exodus - which he was supposed to read. In order to reduce the chances of that sort of thing happening again, it was deemed sensible to omit the extra readings!) but I noticed that the plastic wallets appeared to be difficult to read through by candlelight.

I wasn't in the mood to take any more photos, so I haven't got any of the decorated altar: I shall try and get a few more tomorrow morning.

And now I think I shall call it a night. Here's wishing you a happy and holy Easter.
Posted by Mulier Fortis on 22.3.08

A blessed Easter for you!

We managed to have the Paschal fire outside here and the candle stayed lit....just, despite the blustery conditions.
I have just woken up to avery snowy Easter morning...There's a thick carpet of soft snow in a place where we get plenty of heavy frosts but it rarely, if ever snows!