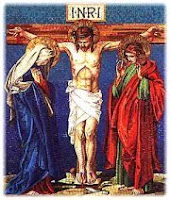 This is the first time, in my ten years' of teaching, that I will not be having an Easter "holiday." A couple of times I had to work during the first part of Holy Week, and twice before (maybe three times...) I've had to take Maundy Thursday off as unpaid leave so as to be able to attend the Chrism Mass at St. George's Cathedral, but the Triduum has always been part of my school holiday: usually the start, more often the middle. And the Easter Octave has been a joyous celebration, with the luxury of daily Mass.

This year my school has a "Spring Break". Most people still refer to it as the Easter holiday, which has led to some confusion: when I speak of Easter, I mean this coming weekend, whereas most of my colleagues mean the holiday which will occur two weeks later. The phrase "The coursework has to be marked by Easter" takes on a rather different meaning (and caused me to experience near-heart-failure!)

It means that this year I feel totally unprepared for the Triduum and Easter Sunday. Work is continuing apace, instead of slowing down for the holiday. I haven't been able to get myself "geared up" physically and mentally for the private retreat I usually make, and haven't even managed to draw up my timetable in preparation. Tomorrow I have a "twilight Inset" session (two hours after school listening to someone burble on about inconsequential items that would be better off put into a memo... and then shredded.) Wednesday sees an after-school staff meeting. More burbling... though this time it's departmental stuff, and so not a complete waste of time.

So no time to prepare myself. And I am out-of-sorts as a result: caught off-balance, wrong-footed... and I've realised that I don't like it one little bit.

I too am experiencing this (feeling rushed into easter!), but I am blessed in that Thursday is my day off anyway. (Yes, our official break doesn't start until this Friday either.)

Working in education usualy has its benefits at Eastertime, but I think of those who work in other jobs, not directed by the school timetable, who will always have to work on Maundy Thursday. Thank God for small mercies :)

Awww... I feel quite sorry for you Mac. And guilty for myself, as I'm sitting here, on Annual Leave.

Not sure what to suggest, except, as the nuns used to say, "offer it up"!

"twilight inset" God in heaven, what a stupid name - the name alone would induce me to sit in the back and make deprecating remarks to nearby likeminded colleagues - starting off with "what idiot scheduled this thing for Easter week? Satan?" then I'd go from there. At the very least you could play "BS Bingo."

Mac, Easter for me in the Oratory choir is absolute murder, and I have to work on Maunday Thursday! Usually by the end of Solemn Vespers on Easter Sunday I collapse exhausted after 9 services! It is imperative for me to take a weeks holiday afterwards to recover..