Not Wishing To Be Pedantic, But... 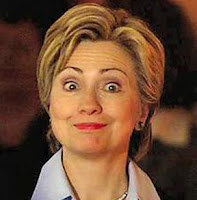 Hillary Clinton seems to have contracted foot-in-mouth disease. Previously she claimed to have arrived in Tuzla in 1996 under sniper fire, and reported that she had to run from the plane for cover.

Unfortunately for Mrs. Clinton, the cameras were rolling... and enterprising newsies have exhumed the footage... which shows the First Lady being greeted by a smiling 8-year-old and calmly walking away from the plane.

Mrs. Clinton told a Pittsburgh radio station: "You know I have written about this and described it in many different settings and I did misspeak the other day. This has been a very long campaign. Occasionally, I am a human being like everybody else."

charity forbids me to answer that question!

Hitlery has no saving graces. It's EXCEEDINGLY easy to catch her when she lies. Her lips move.

LOL Mac dont tempt me..To many she is Hillary to others she is sheer Hellary!

We Yanks have our royals too, Queen Hillary is our favorite and don't forget naughty Prince William!