Well, Since You Asked... 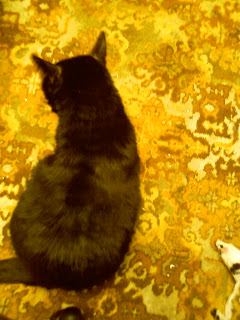 ...here's another cat photo, this time of Sylvester. He's been pretty uncooperative tonight, and keeps moving just as I try to catch him on camera. Because of the slow shutter speed, this means that I have little chance of getting a good "face" shot... and frankly, pictures of a back end of a black cat aren't very good (the camera just can't cope with the lighting levels.)

Actually, I suspect Sylvester has been having a bit of a spat with some of the other cats in the neighbourhood. I have been informed, in the past, that my beloved little cat is a bit of a tearaway... and he has been seen bullying the cats next door. He seems to have come off a little the worse for wear this time: a couple of scratches and possibly a bite... 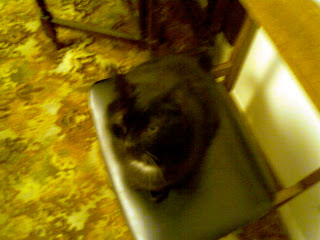 In addition, his right eye appears to have something wrong with it. The eye isn't red or inflamed, and he doesn't appear overly sensitive to light, but it's a bit "gunky," and slightly closed.

Sylvester doesn't appear to be in pain, and he's purring... and eating plenty... but a trip to the vet might be necessary, if he doesn't get better before the weekend. Oh joy... have you ever tried to get a reluctant cat into a cat basket?
Posted by Mulier Fortis on 12.2.08

Dear Mac,
For gunky eyes (and we get a lot with our old dears) we usually use a twice-a-day gentle bathing with cotton wool wetted with mixture of one teaspoon of kitchen salt in half pint of cool, but previously boiled, water. Hope this helps Sylvester.
all the best,
Philip

PC sends her regards to Sylvester....and she's a veritable Houdini when it comes to cat baskets. Often ends up on NC's shoulder looking out of the car window by the time we get to the vets!

Have you ever tried to force an uncoperative cat to take a pill? Oh my goodness our previous cat was horrible. SHe would scratch and bite. To make matters worse, somehow she would hold the pill in her mouth and then spit it out in my drawer. Our vet had to keep her a few days to make certain that she took her medicine. We couldn't make her take it.

Hi, I've got a 3yr old ginger and white tom, neutered, who loves to fight,(and sleep). My old next door neighbour had 2 strong cats who kept him in check but she moved away and the new lady has 2 quiet and shy cats. He has battered them into submission and bitten her several times when she has intervened and now he has begun to extend his territory over the entire village. There is only one cat which offers any resistance. When he comes home he is sweetness itself. It has been suggested I have him put down but I'm having none of it. Cats will be cats and they have their own ways of sorting things out. As an interesting point of law you are liable for the actions of your dog if it strays but NOT those of your cat and you can not be made to prevent your cat from entering other peoples property, it is recognised in law that they have a natural inclination to roam. However sweet a cat is I think they all lead double lives and that's partly what makes them fascinating.