One Nomination Not Related To Politics... 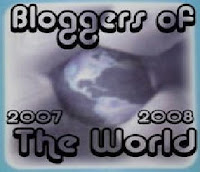 I'm really sure that it's terribly interesting for the Americans... they get to vote on who they're going to get to vote for... Seems like a good idea, I suppose it's like the Tory Party voting for Cameron or the Labour Party voting for Brown (oops, no, sorry, they didn't do that...) But today a commentator mentioned that the actual election isn't until November...

Anyway, I'm not being nominated for President or anything like that, but I have been nominated for a teensy weensy award... That Nice Mr. Smith went and did it. Unfortunately he didn't put up any rules, so I have no idea how many people need to be nominated back. On the basis that it's "Bloggers of the World," I've tried to spread it about some...

Ok, first up is Fr. Zuhlsdorf... he counts as Vatican State (yes, I'm stretching a point... I don't care... my blog, and I am lousy at geography anyway!!)

Next is Leutgeb... she counts as England & Wales because she lives in England, but has Welsh spotty bread as her blog name.

Paulinus and Mark tie for the Scottish connection. I think one is in Edinburgh and one in Glasgow... that should keep them nicely in competition...

Esther gets the Hawaii slot. Ummm, is that actually part of the USA?

Fr. Owl flies the flag for former British Colonies... he's in Canada. Why? I fail to understand the attraction of fish, penguins and polar bears. Maple syrup is a bit more my thing, though I wouldn't feel it necessary to emigrate. Supermarkets are quite cosmopolitan these days...

The West Coast of America is Karen's little spot. I like the fact that Karen appreciates my sense of humour. Of course, she hasn't actually met me in person...

(I haven't tagged Fr. Tim because I tagged him for a meme a while back and he ignored it. And then he deleted my comment which reminded him he hadn't done it. So I'm sulking!! But if he wants to do this one, then he's forgiven... and tagged! Hey I'm female, I'm blonde... two good reasons for why I'm allowed (expected, even!) to change my mind... frequently!)

There are so many blogs I enjoy reading, I couldn't possibly manage to name them all, and I've probably offended several people. If you want to be tagged, consider it done, but let me know in the com-box.
Posted by Mulier Fortis on 6.2.08

Why thank you! Nice surprise! And, yes, HI is part of the USA. Actually someone once asked me if I drive or fly to and from the Mainland ;-)

Hee-hee--actually Fr. Owl is in Vermont in New England, BUT it does have maple syrup up the ying-yang, if not penguins...although, given the weather there this time of year I'm sure it seems like it. HOWEVER it used to be part of the former British colony of New York.

Fun award, let me give that some thought!

Ester, you mean you haven't learned to walk on water yet?

Thnak you, Mac - actually I'm in the USA - right next to the Canadian border in Vermont - but I'm sort of the 'last priest in the USA' - at least this part!

Told you my geography was lousy!

To clarify: Mark is the Edinburger(though he lives in South Queensferry), I'm the (adoptive)Weegie (though I'm actually a Yorkshireman)

Thanks. Packing to go on a school trip. Back next week. Will paste it on then.