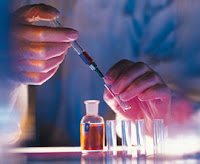 The quote and the post title come from the eschatological discourse of Jesus given in the Gospel of St. Mark. It was what came to mind when I considered the Human Fertilisation and Embryology Bill which has been introduced by the UK government.

I was very, very cynical when the Human Fertilisation & Embryology Authority (HFEA) held its so-called consultation meeting on the creation of human-animal hybrid embryos. I was proved right.

The Human Fertilisation and Embryology Bill is due to have its second reading on 19th November in the House of Lords.

Originally, the emphasis was on embryos which were 99% human. As the following quote from CORE (Comment on Reproductive Ethics) makes clear, this is no longer the case...

"The new Bill instead includes full hybridisation in its remit. Animal eggs combined with human sperm, and human eggs fertilised with animal sperm will be permitted if this Bill is approved.

In ethical terms this is possibly the most groundbreaking aspect of the Bill. Most of the other ethical horrors were already in place. The amended Act would simply liberalise everything even further.

One such instance of liberalisation is the extension of the use of embryo diagnosis to create matching embryos for therapeutic purposes, moving way beyond the original focus on cord blood stem cells, now to include any tissue from the designed baby. How long until this includes 'designer' kidneys and other body parts?

Something not to be overlooked is the reference to reproductive cloning. The document states blithely that the Human Reproductive Cloning Act 2001 is superseded by new provisions in the Bill. This is extremely alarming as it is not at all clear in the relevant sections whether reproductive cloning is indeed prohibited, and not least because of the continual flexibility built into the new text.

Over and over in the Bill one notes prohibitions, but they are a usually qualified with a subsequent exception clause which gives power to amend, either by adding to or repealing, simply through extended regulations."

If you only do one thing for the pro-life cause this year, make it this. Contact members of the House of Lords. SPUC have excellent resources to help - they've produced an information leaflet which you can use, and they suggest who best to approach (and how to address them and other useful stuff like that.) Or you can email your chosen member by going to the WriteToThem website.

Josephine, I would be delighted to contact you, if you will provide a contact email address, your profile is not accessible

Hey,
Thanks for posting this - but isn't it from Comment on Reproductive Ethics? I think it is worth crediting them since they wrote it.

This sounds like a bad science fiction novel. I don't even begin to understand how scientist can view this as moral.

Patrick l - thanks for highlighting the source... Josephine's comment (which appears to have been lost) just said CORE and a Google search didn't identify the website.

Josephine, my sincere apologies - I got the quote off Facebook: it was just posted without any accreditation. I hope the amended post is now acceptable.