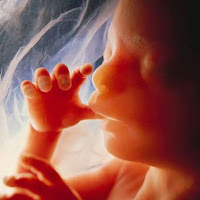 While waiting for the car tyres to be replaced, I amused myself by reading a paper... not something I do very often, as I usually get the news from the internet and (*sheepish grin*) the radio.

So I was interested to see in today's Daily Mail, a double-page spread alerting readers to a television programme next week. The programme, Channel 4's Dispatches, will give details about what actually happens to a foetus when it is aborted. The article was concentrating on the number of late abortions which are carried out in the UK, far later than allowed elsewhere, and highlighting the fact that modern medicine calls into question the idea that a foetus doesn't feel pain before 26 weeks' gestation.

The journalist who wrote the article, Deborah Davies, gives the impression that she is very much in favour of a woman's right to choose, but she is clearly unhappy with the number of abortions which are performed after 12-14 weeks' gestation... and obviously shocked by what medical staff have told her about the procedures used for such late-term abortions. I can't agree with her description of abortions in the first 12 weeks needing only a "simple" suction procedure - it's all pretty gross when you consider that a human life is at stake - but I'm interested to read that more and more people are beginning to question where a foetus is considered to be a "baby" in the making.

The article headline certainly made me sit up: "It's the great abortion taboo: what really happens to an unborn baby when a doctor terminates its life. Next week on TV, a surgeon finally breaks that silence. His words will shock you, but they need to be heard."

When I studied ethics my vehemently hostile anti catholic lecturer failed me on my abortion essay because of blatant factual inaccuracies [irrespective of the fact that I had ton of medical and scientific embryological evidence supporting every one of my facts]
She was adamant that it was impossible for a foetus to feel pain before 20 weeks [she used the same figure for the beginning of brain activity - an abject lie] Cunningham's textbook of anatomy [vol 11.Chapter on embryology] categorically states that the brain stem's neural cortex connects to the spinal cord 17 DAYS!! after conception and thus begins awareness and response to pain - that's nearly a week before the heart starts beating and three days before a woman can be fully aware she's pregnant !
You would be amazed at the amount of lies dong the rounds regarding the life of an embryo and foetus - it's simply pure evil and mendacity of the highest order !!!

Thanks for that Mac. I note that the abortion issue appears not to be going away - as Marie Stopes, IPPF etc... no doubt hoped it would. They of course are happy to peddle death to babies anywhere and everywhere because they make $zillions out of it. Stop and think for a moment - what a strange world we live in. Companies making so much money world wide by killing babies. Individuals in this diabolic industry happily doing their 9-5 five days a week, "Had a nice day in the abortuary today dear? Come on kids, kiss your daddy now, he's back from work".

And we think we are civilised? Yikes!!

Of course, as we all know, the ability or inability to feel pain should have no bearing on our right to murder them.
There are, after all, people born with a condition where they feel no pain at all. Ever.
It's a horrid disease.

Interesting article, Mac.
I'm glad someone is finally exposing this.

This is last nights dispatches programme on you tube. Hight the link in blue and drag it into your (google?) search engine.