It's Been One Of Those Days...

I was a real cross-patch this morning. Last night, our parish sacristan had phoned to say she was feeling ill, and wouldn't be there to set up for Saturday morning's Mass and Benediction. So, no Saturday morning lie-in for me! Bleary-eyed, wet-haired and thoroughly disgruntled, I drove in early. Luckily, there is something soothing about preparing the sacred vessels for Mass. By the time I was able to sit down to pray the Office, I had regained a little composure, and was feeling slightly ashamed of my bad-temper. On the plus side, living alone means that I hadn't actually taken my temper out on anyone, but that wasn't the point.

I then found out that the wedding booked for this afternoon was actually a full-blown Nuptial Mass.

And then I was told that there was a Baptism between the wedding and Benediction.

And Sunday Mass after the wedding... I helped set up for the Baptism and prepared what I could for the Nuptial Mass, and then decamped... leaving the rest for the Deacon.

(I have no idea where Fr. Tim gets all his energy. I wish he'd bottle the stuff - I need some!) 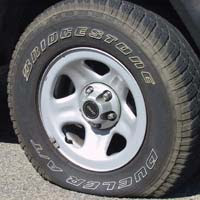 Meanwhile, a friend of mine pointed out that one of my front car tyres was seriously flatter than the other. She offered to get her son to get it pumped up, but I said I'd go to a garage to get it checked out. I was sure that I'd had the tyres checked quite recently...

...and then realised that "recently" was somewhere in the region of three or four months and all I had done then was a check on the tyre pressure. It turned out that I needed all four tyres changed: three had degrading around the rim, and the fourth was balding on the inside. I thought I'd get the wheel alignment done while I was at it...

I'd hoped it could be done pretty quickly (I mean, how long does it take to change a tyre or two?) but a glut of customers also waiting for tyres to be sorted meant that the whole thing took about 2 hours... car garage waiting rooms are not the most comfortable of places...

I'm glad I don't own one anymore!

I am neurotic about "noises" in the car, so yesterday was a very fraught journey back from Callander, saying the rosary the whole way, praying that I wasn't getting a puncture!

(Then of course there was the added cost of someone scratching the paintwork of the hire car! GRRRR!!)

I think you get some time off purgatory for waiting at a auto repair shop. Double if you say the rosary.

In the US they used to teach us the coin trick - "Yes, if you put this penny on your tire tread an can see Lincoln's head, you have waited too **** long and it's a miracle you haven't had a blow out."