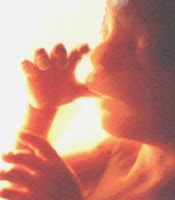 This is a very difficult topic - not the morality of it, there's no doubt that abortion is killing an unborn child, but how best to combat it.

I posted a link to an online petition which called for the UK government to reduce the time limit for abortions, and I signed the petition myself, though I had serious reservations in doing so. As I thought, it provoked quite a bit of comment.

Fr John Boyle (South Ashford Priest) put up a very good post on the reason he wouldn't sign the petition. His view, one I sympathise with very much, is directly opposed to that of Cardinal Murphy-O'Connor. The more I think about it, the more I agree with Fr. Boyle, and regret signing the petition - my reservations won't be noted there!

Now Damian Thompson has weighed in with his views. I often enjoy reading his blog, but I do not always agree with his views. In this case, I think he is wrong. He describes two polarities in the pro-life debate: SPUC on one side (the "hard-liners") and LIFE on the other (he considers these to be the "realists.")

I think that suggesting that there is a sort of "civil war" between the two groups is far from helpful.

Damian Thompson points out that SPUC are happy that the government have no plans to change the abortion laws, while LIFE is pushing for a reduction in the upper time limit.

I have friends working in both Pro-Life Organisations. However, when it comes to a question of the UK parliament and the attitude of government, I would follow SPUC's advice. They have far more experience with the legal and legislative side of things.

Damian Thompson has rather simplified the reasons behind SPUC's opposition to amending the Abortion Act. The numbers in the House of Commons suggest very strongly that any attempt to change the Act (by reducing the time limit) would be bound to fail.

I am also worried by the murmurings I've heard on Radio 4 (the Beeb at it again) which suggest that there are moves afoot to remove the requirement for two doctors' signatures. This is a nominal requirement (I've never heard of an abortion being refused because someone hadn't been able to get two signatures) but it is the law, and we should fight to retain that safeguard.

As for the pragmatic approach so applauded by Mr Thompson, I would just like to point out that it was tried with the Mental Capacity Act, and went down like a lead balloon, with the government assuring Church leaders of all sorts of protective measures, which in the end failed to materialise. SPUC opposed all compromise, but the Hierarchy didn't listen. And now we have death by starvation and dehydration enshrined in law...

The Cardinal would do well to remember the old adage: "Once bitten, twice shy."
Posted by Mulier Fortis on 28.10.07

worried about it too, and would appreciate some feedback on what I said - you always seem to have a clarity of insight I sometimes neglect...look at what I said regarding DT's poison pen letter - adopting the role of a pseudo- counsellor ?? I'm really surprised he didn't tell me to get lost and mind my own business....

I added a comment a couple of days to your piece about signing the petition. It's interesting to see how your views have developed as a result of the discussion, and I think a lot of people are changing their minds as they think more carefully about it. I think SPUC deserves a lot of credit for sticking to its guns, even though other pro-life groups have disagreed. What happened with the Mental Capacity Act showed that SPUC got it right.

However, I think you need to look further back than the Mental Capacity Act to see where things went wrong. Looking back, I think SPUC, the Church, and the pro-life movement as a whole, got it totally wrong with the Alton Bill and the subsequent attempts to lower the abortion time limit. Self-criticism is a strength, not a weakness, and I think the pro-life movement is right to acknowledge past mistakes. It seems that some sections of the pro-life movement are too unwilling (too proud?) to acknowledge mistakes they made, and are continuing with a policy which, in my opinion, will be as harmful for the pro-life cause as the 1990 Act (allowing abortion up to birth) and the Mental Capacity Act.

#1 You cannot trust this government.
#2 The only 'reality' is that babies are being murdered in their mothers womb.
#3 Abortion has to END - period! What's the difference between a 10 week baby or a 14 week baby or a 24 week baby???? They are all human beings with an inalienable right to life!
#4 A country that enshrines in law the killing of its children in their mother's wombs and the only argument is about how old the baby should be to qualify for a sickening tearing apart of its limbs and crushing of its skull???? And we get caught up in that???? A slap round the ears should wake us all up to realise that this government could play the 'age limits' game for years to come! Meanwhile the slaughter of the innocents continues and the blood of these children is on OUR hands as much as on the abortionists because WE HAVE DONE NOTHING!!!!!

Thanks for your added reflection on this.......I started a trail through this yesterday starting at Fr Mildew's blog and onto Fr Boyle's where I commented on concerns about the so called 'pragamatic position'.

Damian Thompson's contention that SPUC "actually welcomes" the fact that the Government is not considering amendments to the abortion act is despicable. Here is the quote from the link to SPUC's website that he provides expressing relief rather than welcome:

Anthony Ozimic, SPUC political secretary, commented: "We are relieved that the government does not seem interested in seeing the Abortion Act amended at this time. Any amendments to the Abortion Act at this time are likely to result in an increase in the numbers of abortions. We call upon parliamentarians to resist calls, from whatever quarter, to table amendments to the Abortion Act and instead to focus upon the many practical ways of reducing the numbers of abortions, in particular by addressing the pressures upon expectant mothers which lead them to consider abortion."

SPUC have been in the game a long time. What the Church should do is adopt a hardline position, saying we are going to publish images of the results of abortion, we're going to organise prayer vigils outside every Marie Stopes clinic with a Cardinal/Bishop/Senior Cleric leading and we're prepared to answer for our actions in court. The abortion law is an unjust law and we consider ourselves not bound to obey it or to keep silent in the face of it. Negotation with a murderous government is not possible.

'Negotation with a murderous government is not possible'.

John Paul II always said that when democracy supports things contrary to the dignity of man then it acts in a totalitarian way. We should face it that we live in a totalitarian, fascist state, even though it may have a friendlier face. No jackboots - but millions of the weakest of our society are slaughtered every year. Strong language - yes, it is. Maybe it's not PC, but it's the truth.

The Church must witness to the truth without compromise. Did you hear Cardnial Murphy O'Connor interviewed by Edward Stourton on Radio 4's the Today programme last week? He suggested that the Cardinal was weakening his opposition on all abortions. This is how it seems, not only to those outside the Church but also to those in the pew. It is really a cause of scandal.

The Cardinal should stay clear of foolish political manoeuvrings on abaortion and insist on the right to life of all the unborn - without compromise.

I also signed the petition, and am now regretting it. Fr Boyle is right - compromises give mixed messages.