A Question Of Nomenclature

When girl altar servers were "allowed" by Rome (after they had been introduced in a direct act of disobedience) there were many who predicted that boy servers would decrease in numbers. The reason was obvious: most servers are at the age where they don't readily "mix" with the other sex. As a teacher, I could see it quite clearly in any classroom.

The boys are less mature, and generally more rumbustious and a lot more fidgety than girls of the same age. The girls, getting the hang of things more quickly, are more likely to carry out their tasks more efficiently. The boys don't like being told what to do by the girls, and they certainly don't like to be made to feel incompetent. So they back off, and the girls take over. The difference between serving at the altar and the classroom is that serving at the altar is voluntary. The boys, ever more conscious that they are surrounded by girls on the sanctuary, just stop turning up. It becomes a "sissy" activity.

This is exactly what has happened. No surprises there.

Unfortunately, when you allow little girls to serve, then you have to allow the older ones to serve as well. And this then brings up the question: at what age should female servers no longer be allowed to serve?

Rise and Pray had a picture from Westminster Cathedral's Corpus Christi procession, which highlighted the problem. The thurifer was a woman. I'm not too good at estimating ages, but let's say she was no spring chicken and leave it at that. And a mature woman in a cassock and cotta gives a very wrong impression: were it not for the fact that the photo was from Westminster Cathedral, I would have assumed it to be from the Anglican Church. 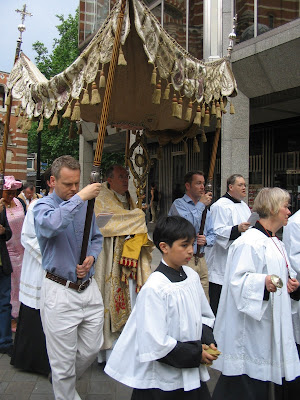 There is one further problem: if a girl altar server is called a "serviette," what does one call a more mature woman server? I think "napkin" would be quite appropriate... any other suggestions in the combox gratefully accepted!
Posted by Mulier Fortis on 12.6.07

Yep, real good for vocations to the priesthood.

I didn't think females were allowed to wear black cassocks, ever. Whenever we have girls serving (school-aged only), the servers wear white albs with a cincture of the appropriate liturgical color. The boys and men wear black cassocks and cottas/surplice.

The parish I grew up in did not (and still doesn't) have the servers wear distinctive garb. This is an even bigger issue for me then having girls serve at the altar.

I thought I saw that photo right. The cassock just looks wierd on a gal, whatever the age. I would call her a serva-seniorita. Hehehe...but I'm in a mood.

Yup. I saw that one on Msgr. Langham's blog too and was rather surprised by it.

Fortunately in most of the dioceses in Malaysia (except the one where a Jesuit is bishop) do not allow altar girls. Pray that it would continue to be so.

It looks too awful for words! Thanks be to God i'm in The Birmingham Oratory Parish..

At my parish I call them the "GAB society" meaning "Grandma Altar Boys". I don't know, but to me woman look very ridiculous in an alb of any sort. Even worse in a cassock and surplus.

My sons serve, my daughters don't and wont.
Perhaps girl servers might find a vocation to the religious life-but so far there is no sign of this and I think too much damage is being done.
Why on earth did the Vatican cave on this?

I agree; I think it's inappropriate for a woman of her age to be dressed in that way and leading the procession. It's confusing and frankly unneccesary.
Do they have NO willing boys/men that a post-middle-aged woman needs to do it?

No disrespect to her personally but...what was she thinking?
I'd be ashamed & embarrased to do that myself!

Ah, but just remember, in some places willing men are told they will not serve...

Worse than the older female altar servers is those beautiful girls in their late teens or early twenties who are serving with make-up and their hair done all pretty. I don't think this can be a good thing.

Although most parishes in our archdiocese have female servers, the parish in my hometown doesn't. We rarely have problems finding servers. Even weekday Mass has at least two or three servers.

The parish where I've been living for the past few years allows female servers. It's a parish of around the same size, and yet there is almost never a server during the week and they even have a hard time finding servers for Sunday even.

Oh dear, I broadly agree, but I'm sure the altar server lady involved has good intentions.

Nevertheless, it certainly is confusing and distressing having cassock wearing women running around the sanctuary where ever it is.

It is a pity that it was only recently that Westminster Cathedral caved in to allow all its Masses to have female altar servers. :(

I do hope Andrews dioceses in Malaysia don't cave in to this dire thing.

I'm not too good at estimating ages, but let's say she was no spring chicken and leave it at that.

That made me laugh out loud, Mac.
Gak - she surely does look straight out of the (how's it, Mark?) Anglican 'community.'
;)
Hey, maybe it's Prince Valiant and not a woman at all.
That little boy is thinking, "I HATE it when I have to serve with Grandma. She thinks she knows EVERYTHING and acts all big."

Heh. Sorry Ma; I can't help it. The reasons to leave the Anglican Communion make pointing out such things quite important (at least interiorly; maybe not so exteriorly, on other people's blogs!).

Your original point is true. Girl altar servers mean that boys think it's a girls' thing. Then you get secondary girls refusing to serve because it's a junior thing. Then you have no servers. I have seen this happen: it took two years. But the PP doesn't like servers anyway: "we don't have servants any more".