It is so easy to get bogged down with the injustices and sacrileges which happen in the West. Yes, there are places where it isn't possible to get a Classical Rite Mass, and yes, the Novus Ordo Liturgy can be mangled so that the sense of the Sacred is lost in the teeth-achingly awful happy-clappy atmosphere. And yes, sometimes one wishes that our Bishops would remember that, as mammals, they should be able to locate a backbone and stand up to the secular culture. 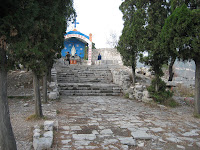 But reading reports on Zenit about the Church's sufferings in other countries, such as China, make me realise just how fortunate I am.

The sanctuary of Our Lady of Mount Carmel will be dynamited following a government decision that the pilgrimage site is a place of illegal religious activity.

The Henan Province government will prevent the annual July 16 pilgrimage, which normally draws 40,000 pilgrims for the feast of Our Lady of Mount Carmel, AsiaNews reported.

The shrine was built in 1903 by a priest from the Pontifical Institute for Foreign Missions, Monsignor Stefano Scarsella, then apostolic vicar to northern Henan. The shrine was meant to thank the Blessed Virgin for preserving Christians from the dangers of the Boxer Rebellion.

The sanctuary lies in Tianjiajing, in the Diocese of Anyang, in a scenic, mountainous area that some speculate will be used for a commercial or government building.

The provincial government has mobilized 700 soldiers for military exercises in the area since May 12, when the planned destruction was announced. Roads leading to the shrine are closed and pedestrians who go near the area are searched.

Having just come back from a pilgrimage to Lourdes, I am saddened to hear that so many Chinese Christians will be denied a chance to go to their own shrine, especially since they have only recently rebuilt it. Read more about it HERE.
Posted by Mulier Fortis on 21.6.07

Oh no! Not Our Lady of Mount Carmel! Thanks for the heads up (not to mention the reality check). Will alert the "troops."

This is horrible, horrible news!