More On The 99 Names 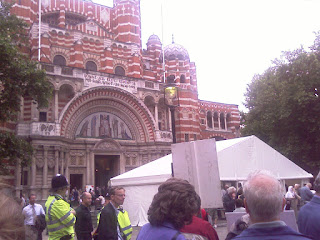 As the Brighton line goes all the way to Victoria, it seemed to be rather fortuitous that we had arranged the bloggers' lunch for the very day of the Beautiful Names concert at Westminster Cathedral. 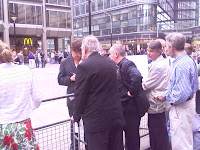 Fr. Tim and I arrived at about 6:30pm, and found that the police had anticipated our arrival. There were already some people in the corral praying and holding placards proclaiming the Divinity of Christ. Another priest, Fr. Clifton, soon joined us. Both priests took the opportunity to speak to reporters, and at 7pm Fr Tim started us off in singing the Credo, and lead the prayers and hymns (you can see the programme he came up with over on his blog.)

It was a very good-natured protest (I remember being involved in one or two protests as a radical student, and the atmosphere was far more confrontational and unpleasant) and although we didn't stop anyone going in to the concert, we were at least able to make some people aware of the inappropriateness of a concert proclaiming the Names of Allah being performed in a Catholic Cathedral consecrated to the Precious Blood of Our Lord and Saviour, Jesus Christ. It is hard to understand why the concert had to be performed in the Cathedral and not at the Royal Albert Hall, or the South Bank...

The real extent of the sacrilege becomes clear when you consider that, in order to prepare the Cathedral for the concert, the regular Masses occurring that day were moved... to the Cathedral Hall ! I think this action amply demonstrates the priorities of the English hierarchy.

You can read more about the Prayer Vigil HERE.

UPDATE: I noticed a question on another blog about numbers in attendance. We did a head-count, and found that there were 60 people present at the protest.
Posted by Mulier Fortis on 21.6.07

Ye godsQ!-that was bad for my blood pressure.
My daughter (aged 13) has just asked 'Can't the pope just...just...slap them!"

Same old from our spineless leaders.

You did your duty, that is all anyone can ask of you. I am sure Jesus and Mary are very happy with you.

Do you think it is the first time Westminster Cathedral has been desecrated? In the end it is the Church of the very ecumenical, post Vatican2 Archbishops - the present one is no better than his predecessors. The protest itself is very good idea and should be attended by as many as possible faithul, good Catholics. Well done!