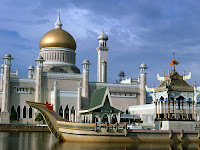 This was highlighted on Fr. John Boyle's blog: the Evening Standard is running a poll to determine whether a £100 million mosque should be built near the Olympic Stadium to accommodate the anticipated 70,000 Muslim visitors.

I have no objection to the building of mosques. I applaud the idea that a religion should be concerned for the spiritual welfare of its followers during their absence from home. However, a local Christian church, compulsorily purchased to make way for one of the stadia for the Olympics, has been refused planning permission to build a new church anywhere near the area where all its congregation lives.

An unacceptable example of blatant double standards. As a slight aside, I wonder what would have happened if a mosque had been in the way of the proposed Olympic stadium...

...but I digress. Make sure you go and make your views known by voting HERE.
Posted by Mulier Fortis on 26.3.07

However, a local Christian church, compulsorily purchased to make way for one of the stadia for the Olympics, has been refused planning permission to build a new church anywhere near the area where all its congregation lives.

Perhaps if the Christians threatened violence...?

I AM opposed to the building of mosques on principle - at least, as long as moslem countries don´t reciprocate the favour, and stop their blatant persecution of anything non-moslem.
Islam is NOT just another religion, but a dangerous, imperialist cult - and no, I do NOT mean "islamism" but islam.
Go check out "www.faithfreedom.org" - a website by an ex-muslim.