Not as Technically-Minded as I Thought...

I was privileged to meet up for lunch with a certain non-blogging priest (who wishes to remain anonymous) and was treated to a guided tour of the church in which he is Curate, dedicated to St Joseph.

The church is rather a nice one, and has some very attractive statues, and so, ever mindful of a blogging opportunity, I promptly whipped out my camera phone and (with Father's permission, nay, encouragement even!) started snapping away.

Alas, as the title of this post indicates, I seem to have messed up in spectacular fashion... when I came to download the pictures, I found that only three of them had been saved.

This is a rather good statue of Our Lady and the Child Jesus which is currently in the Sacristy... there is a possibility that the statue might find its way into the newly-built hall. 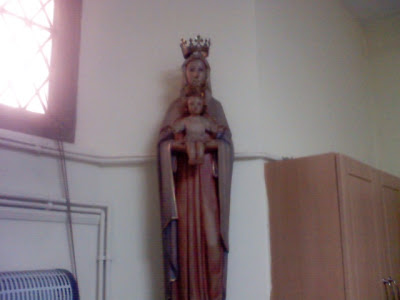 Also in the Sacristy is this picture of Pope St Pius X - the parish of St Joseph's was carved out of the neighbouring parish of St Pius X, and there is quite a devotion to him... I think I took a photo of his statue, but alas... 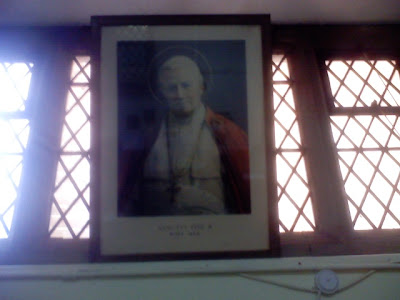 This is the last of the photos I could find. St Thomas More, unusually, is shown with a beard. Normally clean-shaven, he grew a beard while in the Tower of London: he joked with his executioner that he should take care not to catch his beard under the axe, for it had not been guilty of offending the King! 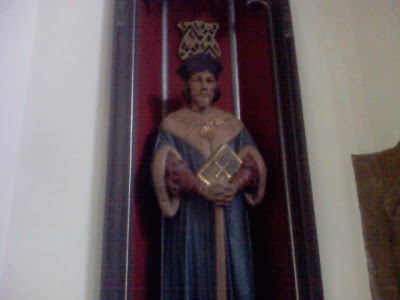 I am sure that you are all devastated at the loss of the other photos, including one of a really beautiful statue of Our Lady... I guess I shall just have to go to lunch again soon to remedy the matter!
Posted by Mulier Fortis on 27.1.07

at least you got three pics, Mac; I went to Bath yesterday and none of my mobile ones appear to have made it back!