I had a really great day when I renewed my vows two weeks ago. I also mentioned that Fr Tim had sacrificed the second of the two poundcakes which he'd ordered from Ma Beck for the party afterwards... and that the cake had gone down a real storm ! Fr Tim took pictures, but he's been a little busy lately (well, so he says...) so I've only just received them...

...admittedly I wouldn't have been able to upload them before now anyway!

But here is the "before" picture when the cake made its appearance... 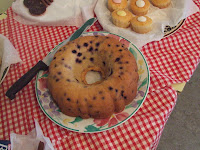 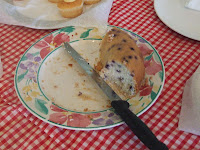