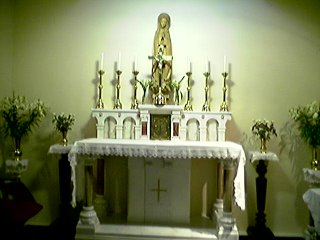 An interesting little snippet came my way via the blogosphere: a post circulating the latest rumours about the Classical Rite Mass on Credo.

I shall nail my own colours to the mast here. I like the New Rite Mass (yes, I fully expect to be blasted to smithereens on the spot for daring to utter such views) but in true "sitting-on-the-fence" mode I will add that I only like it when it is celebrated with reverence and decorum, and according to the rubrics.
I do not like the Novus Ordo Mass when the priest decides to play fast and loose with the words of the Mass, or tries to make me feel included by becoming politically correct ("sisters and brothers" is clumsy and downright patronising), or, under the guise of not being too caught up in details, cuts corners in the choice of sacred vessels, vestments and altar linens, etc. etc.
Under these circumstances, I am generally to be found gritting my teeth, scowling, and remaining in my seat only because, once the words of consecration are uttered, my Lord and God is present on the altar. And if I am in a state of grace then no crummy liturgical abuser is going to get in the way of me receiving Holy Communion (I un-grit my teeth at that point!)
I had better also make clear that my own Parish Priest does not muck about with the liturgy. It would be interesting to do a time-and-motion study to gauge whether my suspicions about his gradual introduction of eastward-facing Mass are true (I think he's on about a 5mm turn each week) but other than that he's fine...
;-)
Lately (the past couple of years) I have been exposed occasionally to the Classical Rite Latin Mass. The difference literally took my breath away: I found myself afraid to breathe at the Consecration and at the elevation of the Host in case I disturbed the solemnity of the moments.
I don't speak (or read) Latin, although I occasionally follow the words of the Mass in a Missal with the English translation next to the Latin. But usually I just sit quietly and pray (sometimes the Rosary, sometimes from a prayer book and sometimes just silently in my own words). I can tell pretty easily what part of the Mass has been reached. I never feel as if I'm being excluded, or am not praying. And because of the silence and the ageless symbolism of the gestures I feel the presence of the angels and saints, and I feel privileged to be there, united with the whole Church throughout time...
I now understand my father's horror when, coming back to the Church after a long absence, he returned home one Sunday declaring that it had all turned "Protestant". I thought he was over-reacting to the use of the vernacular, never imagining in my wildest nightmares that the glories of the liturgy which had been celebrated, fought for and died for over the centuries could possibly just be discarded on a whim.
I'm not calling for the Novus Ordo Mass to be abolished (though it needs some serious tightening up to avoid the abuses which have crept in) but there has to be room for the Classical Rite. After all, we are the Catholic Church.

Excellent post, and anyone who disagrees with you disagrees with the Church, for what you wrote is exactly the position of the Roman Catholic Church.
I like the NO Mass fine, but it's so very rare to see one done reverently. There's too much wiggle room for the priest. But in fact, the Mass I most enjoy at my parish IS the NO, but it's done in Latin, ad orientem, with Gregorian Chant, etc., and it's beautiful.
P.S. That's funny about Fr. Tim slooowly turning around.
He'll have y'all knee deep in Gregorian Chant before you know it.
;)

I don't speak or read Latin but I find if I follow the English translation right through from when the Priest approaches the Altar to the last words of the Last Gospel the beauty of the Mass shines through. I am far too busy turning pages and keeping up to be distracted and feel very involved and focussed on the Sacrifice - the true meaning of the Mass is slowly but surely begining to be appreciated.