Time is doing very odd things during this period of quarantine and lockdown.

I'm not actually sure if the days are long or not; I wake up early, and the hours appear to stretch ahead of me for simply ages, but I get to the end of each day with the distinct sense that I have accomplished very little (ok, I realise that most people will be doing rather more than me!) I find it difficult to differentiate one day from another, as there is very little happening to help identify them. At the same time, however, the weeks zip by at an amazing rate: I was sure that I'd blogged just a few days ago, and now I see that two and a half weeks have actually elapsed since my last post...

It is partly my drug-induced mental state, but some of my friends are telling me that they feel the same way. We are waiting... and no-one is certain what, exactly, we are waiting for... Without knowing what is coming up next, we cannot really prepare for it. And so the days in quarantine slip into weeks, and the weeks become months. And I worry that I am wasting this extra time I have been given... it's depressing, and anxiety-provoking.

Therefore, in order to fight against this vague feeling of angst, I have decided to change how I view the whole situation. I have drawn up a timetable (of sorts) - a list of things to be done on particular days. I can't be specific on the time of day, as that would be unrealistic - despite waking up late the other day, I fell asleep halfway through Matins and woke up two hours later, still clutching my phone. And since, on days when the weather is cold and damp, the pain can make getting out of bed a major achievement, I won't be drawing up a very long list for each day. But I will at least have something specific to aim for.

I was getting very lax before the lockdown, fitting prayer around everything (and anything) else I was doing. The forced inactivity has helped me to see that this needed to change. So I started by basing each day's timetable around prayer. Parts of the Office, Mass, the Rosary, the Angelus. Not with specific times (except for the Angelus, and, to a lesser extent, Mass - I can pick a convenient one if necessary), but linked to certain occasions, such as "after getting up". Necessary household chores have been identified and given specific days on which they should be tackled. Some things happen daily, some only once a week, some less frequently, but by allocating a slot, I can check it's getting done, and I'm not just frittering time away doing nothing. It also helps with the Examen at the end of the day: it's rather difficult to assess whether you have accomplished what you should have done if you have no idea what you should have done, which just leaves a nasty sense of generalised guilt at "not doing enough." And I'll allow some time to play with the cat, and to blog and tweet.

Looking at what I've written, it seems obvious that I'm not in Lockdown, or in Quarantine... I'm on an extended private retreat! How about that for a change of view... 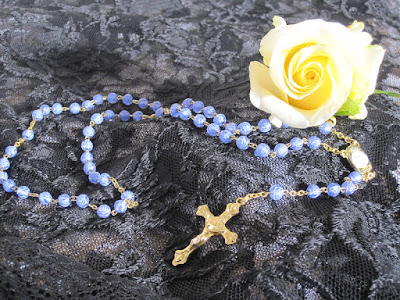 "Extended Private Retreat". What a beautiful
way of expressing our current situation !!!

That is, exactly, how I view my days of so-called inaction.

I regard each and every one of them as an antidote
to the previous regime of running about every day
like a headless chicken. Achieving exactly what ? I know not.

Welcome back to Blogging, Mac.